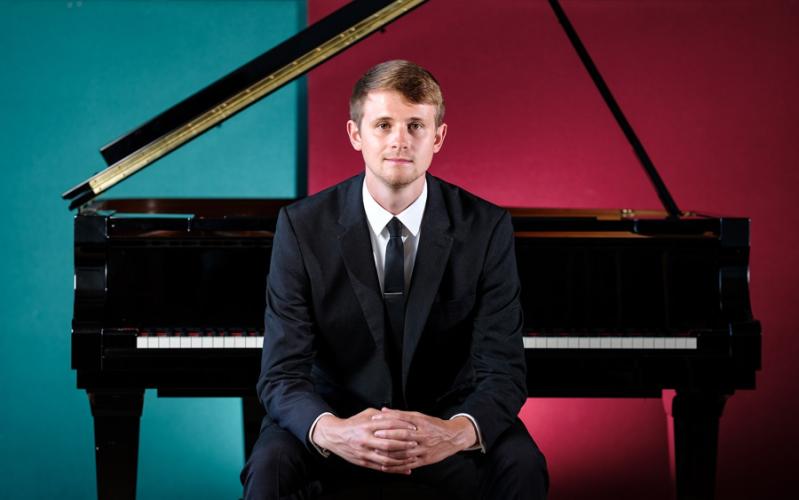 Pianist Tom Hicks will perform works by British composers in a concert at 6 p.m. Friday, Sept. 23, in the Music Recital Hall, Wright Music Building, on the campus of Stephen F. Austin State University.


NACOGDOCHES, Texas – Pianist Tom Hicks will present a guest recital that features works by British composers when he performs at 6 p.m. Friday, Sept. 23, in the Music Recital Hall, Wright Music Building, on the campus of Stephen F. Austin State University.

The program will “explore music by less familiar British composers,” said Hicks, who is visiting assistant professor of music and piano, director of the piano department, and director of collaborative piano at Whitman College, Washington state. The recital is a presentation of the SFA School of Music and includes music by Robert Schumann, John Ireland and Samuel Coleridge-Taylor, among others.

“I was drawn to John Ireland because he spent time in Guernsey, which is the British island where I am from, and because he wrote a suite for piano inspired by his time there,” Hicks said, adding that the program also features works by “a composer of color, a female composer and an LGBTQ+ composer.”

Hicks will perform Schumann’s “Kinderszenen,” Opus 15, “Scenes from Childhood.” “These are pieces about children but are poetically and musically sophisticated and are not without their technical challenges, either,” according to Hicks.

Ireland’s Piano Sonata was “written in turbulent times, covers a huge range of emotion, and shows the composer’s command of writing for the piano,” David Wordsworth, chairman of the John Ireland Charitable Trust, said. Critic Ralph Hill considered Ireland’s Piano Sonata to be “one of the finest and most important since Liszt.”

Hicks describes Coleridge-Taylor’s “Andante from Three-Fours,” Opus 71, as “a gift for conjuring up a charming, completely unpretentious miniature,” and demonstrating his “Dvořák-like ability to write memorable melodies.”

Hicks has an expansive repertoire and has appeared as recitalist in venues such as The Wigmore Hall in London, The Bridgewater Hall in Manchester, and in many other venues throughout Europe and the United States. Hicks is a gold medalist in the Wales International Piano Competition, the EPTA UK Piano Competition and the Croydon Piano Concerto Competition. As a teacher, Hicks has also taught piano at Yale University and Northwestern University.