‘The Jungle Book Kids’ design elements ‘feast for the senses’ 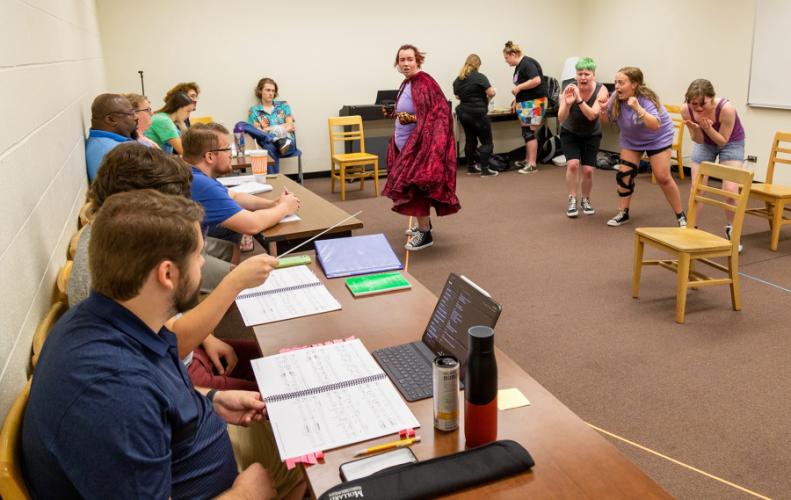 “The Jungle Book Kids” moves from rehearsals to the live stage starting at 10 a.m. Wednesday, June 29, in Kennedy Auditorium on the SFA campus. The show is part of this year’s SummerStage Festival presented by the SFA School of Theatre.


NACOGDOCHES, Texas – Audiences attending the Stephen F. Austin State University School of Theatre’s presentation of “The Jungle Book Kids” will be transported to a colorful, lively jungle filled with a host of animals and interesting characters they are sure to love.

Through the creative efforts of the production team for the children’s musical, “The Jungle Book Kids” will delight audiences of all ages with its music, choreography, costumes, and its scenic, sound and lighting designs, according to Cleo House Jr., director of the School of Theatre and of the play.

“The design elements are as much principle players as the actors or the music,” House said. “Lights, sound, scenery, costumes, props, etc. help to not only create the environment, or set tone, but it is the magic.

“It is the icing on a delicious cake,” he added. “Think about how great a cake might be, but it only reaches its full potential when you add the icing. Design elements are the first things the audience sees; those elements clue them in on how to respond to the show. The designers for both productions have been working incredibly hard to give audiences a feast for all the senses.”

Based on the novel “The Jungle Book” by Rudyard Kipling and the beloved Disney film by the same name, this children’s stage version has the jungle jumpin’ with jazz and high energy. Audiences will enjoy watching Mowgli, Baloo, King Louie and the gang as they swing their way through madcap adventures, singing along with favorite tunes, including “The Bare Necessities” and “I Wan’na Be Like You.”

“It’s great to see the process and be a part of it,” he said. His approach to the music has been “to work fast and utilize rote-style teaching to move through the initial note-and-rhythm rehearsals.”

“By doing this and having a basis for the music, we then incorporate individual characters and determine how they fit into the jungle most effectively,” Peterson added.

Kenneth Verdugo, the show’s scenic designer, began his process by determining House’s vision for the show, and what was needed to bring that to life on stage.

“He needed a rock that rotated and turned into a throne; he needed a tree that moved; and he needed a screen of vines to hide some of the action,” Verdugo said. “Thereafter, I added some elements that created balance and an aesthetic look that referenced the Disney film version of ‘Jungle Book,’ but one that also rather had a more serious feel to it.” In the end, the goal was to be bright and child-friendly, Verdugo added.

One of Verdugo’s greatest challenges was designing a “very large tree that moves.” Additionally, there are some elements that are shared between “The Jungle Book Kids” and the other SummerStage Festival show, “Women Who Weave.”

“Doing shows like this in ‘repertory” is always challenging,” he said. “‘Rep’ means more than one show at a time, where two or more shows share some of the same elements and space. It’s a bit of a task for crews to swap out scenery between shows. This is one of the aspects of repertory theatre that the audience does not get to see; they only get to experience the results of that labor.”

“The Jungle Book Kids” has music and lyrics by Richard M. Sherman, Robert B. Sherman and Terry Gilkyson; with additional lyrics and book adapted by Marcy Heisler; and music adapted and arranged by Bryan Louiselle. Disney’s “The Jungle Book Kids” is presented through special arrangement with Music Theatre International.

All performances are in Kennedy Auditorium, 1906 Alumni Drive, SFA campus. For tickets, call the SFA Fine Arts Box Office at (936) 468-6407 or access finearts.sfasu.edu/purchase. For more information about SummerStage, visit theatre.sfasu.edu.