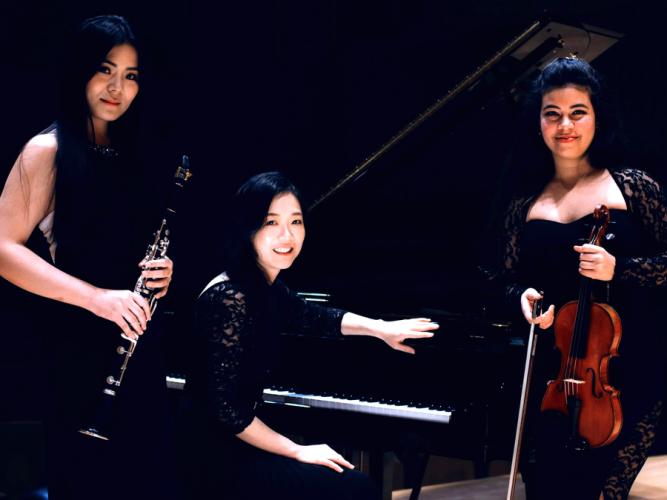 
NACOGDOCHES, Texas – The Lumi Trio will present a program of works by living composers when the ensemble performs at 7:30 p.m. Tuesday, March 15, in Cole Concert Hall on the campus of Stephen F. Austin State University.

Clarinetist Yeh is a D.M.A. candidate at Michigan State University. She is the second prize winner of the International Henri Selmer Paris Clarinet Academy and Competition and the founder of the Lumi Trio in 2017. She holds degree from the National Kaohsiung Normal University, the Taipei National University of the Arts and Boston University.

Violinist Diaz serves as a member of Artistic and Educational Committees of El Sistema, a voluntary music-education program founded in Venezuela that seeks to transform children’s lives through music.

Lumi Trio works to rediscover, program and diffuse the substantial literature commissioned over the past 30 years by the legendary Verdehr Trio. Founded in 2017 and combining three distinctive musical personalities into a unique collective, Lumi Trio exhibits rarely performed 20th and 21st century pieces alongside standard repertoire.

The program includes “Portmanteau” by Stephen Lias, professor of composition at SFA, along with “Pockets of Comfort” by Michael Eaton; “Piezas Luminosas” by Gonzalo Garrido; “Solstices” by David Biedenbender; and “Compass Points” by Ricardo Lorenz.

“We are performing music by living composers, specifically Michael Eaton and Stephen Lias, who wrote music for Lumi Trio in 2021,” Lee said.

Lias’ music is regularly performed throughout the United States and abroad by soloists and ensembles. Since 2009, he has focused increasingly on his work as an adventurer-composer. His passion for wilderness and outdoor pursuits has led to a growing series of works about the national parks of the U.S. He has served as artist-in-residence at Rocky Mountain, Glacier, Denali, Glacier Bay, and Gates of the Arctic national parks, and has written more than 15 park-related pieces that have been premiered. His orchestral work “All the Songs that Nature Sings” was commissioned by the Boulder Philharmonic with a grant from the National Endowment for the Arts and performed at Washington D.C.’s Kennedy Center. He is the founder and leader of the annual "Composing in the Wilderness" field seminar offered by the Fairbanks Summer Arts Festival. His students have scored films, been commissioned and published, and are the recipients of regional, national and international awards.

Eaton is a young composer earning his bachelor's degree in music composition at Michigan State University. He has written and arranged for fixed media, the concert stage, musicals, commercials, marching band, jazz band and video games. He works to bolster the presence of scoring music for video games in the greater music curriculum by combining his multi-media experiences to teach classes on the subject.

Biedenbender is a composer, conductor, performer, educator and interdisciplinary collaborator. He is associate professor of composition in the College of Music at Michigan State University.

The compositions of Lorenz have garnered praise for their fiery orchestrations and rhythmic vitality as well as for raising awareness about global societal challenges that concern the composer. These impressions have earned him two Latin Grammy Award nominations and multiple commissions. He is professor and chair of the music composition area at Michigan State University

Garrido-Lecca is a composer whose works include compositions for symphonic orchestra, diverse chamber ensembles, electronic media, piano solo and voice. He has also written incidental music for theatre, film, choreographies and video art.