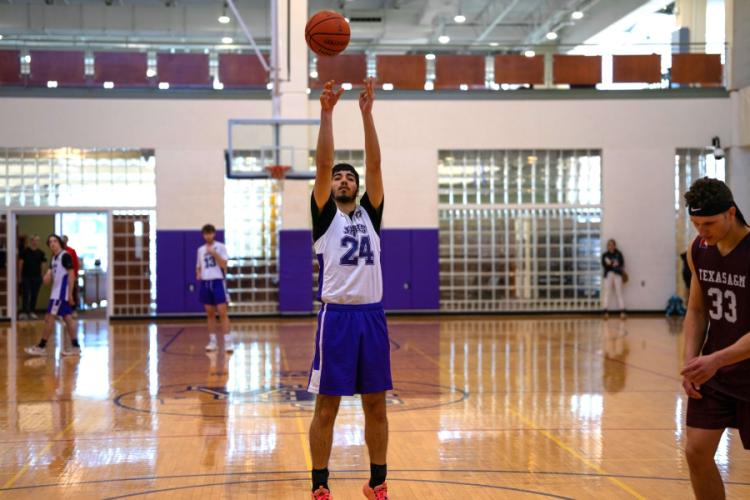 The National Intramural and Recreational Sports Association’s South Division had its Club Basketball Conference Tournament at the Student Recreation Center on Feb. 19 and 20. The event brought as many as 150 student-athletes to town.

Based on the “round robin” format, teams vied for as many wins as possible. They will compete in another tournament in March at Texas A&M University. The wins from both competitions will determine the conference champions and a free entry into the national tournament in April at Wichita State University in Kansas.

This was the first ever NIRSA conference tournament hosted at SFA. Jasmine Randolph and Jacie Klose, competitive sports and camps coordinators for SFA’s Campus Rec, organized the event.

“Throughout my graduate studies here at SFA, I was provided an experiential education. My goal was to reflect those same opportunities through our programs at Campus Rec,” said Randolph. “I look forward to working collaboratively with students, faculty and staff to create a holistic experience for all students.”

Klose shared in that sentiment, adding that she looks forward to making students’ college experiences more memorable through that collaboration.

While NIRSA contains the word intramural, the teams competing in the tournament are actually sport clubs, Randolph said. The key difference is that intramural teams compete on their given campuses, whereas sport clubs compete against teams from other universities.

Randolph is working on an upcoming women’s soccer tournament at SFA in April and is currently in the process of getting a racquetball club established. There are 17 sport clubs on campus, including rodeo, fishing, ultimate frisbee, volleyball, rugby, tennis and jiujitsu.