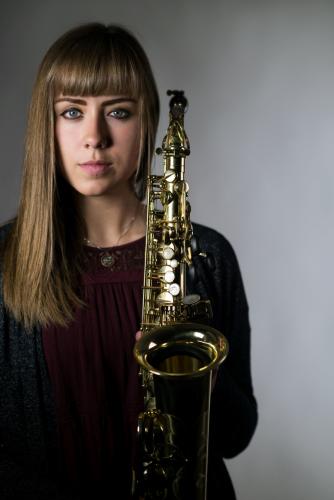 Salli, who earned a Bachelor of Music Education in 2017, will present “The Unaccompanied Saxophone,” which features music for soprano, alto and baritone saxophone with no piano accompaniment, or other instrument, in a concert designed to “explore the unique capabilities of the saxophone including different styles, dynamics, range and extended techniques,” she said.

An educator based in Lubbock, Salli is completing her D.M.A. in saxophone performance at Texas Tech University where she serves as the graduate teaching assistant for both the saxophone studio and new music ensemble. She is on faculty at Lubbock Christian University and teaches both saxophone and clarinet at several public schools in the area.

Her return performance at SFA will feature “Black Mary” by Shelley Washington, “Melodies for Saxophone” by Philip Glass, “Deep Flowers” by  Evan Chambers, and “Tre Pezzi” by Giacinto Scelsi, among other works.

Program notes for Chambers’ “Deep Flowers,” inspired by Indonesian Gamelan, state, “listening to the music of cultures in which we were not raised changes us,” and “my own experiences with Indonesian music have often left me amazed by the beauty that exists beyond our own conventions.”

A piece for solo soprano saxophone in three movements, “Tre Pezzi” was written by Scelsi during his second compositional period after taking a break from music following many hardships that changed his thoughts on music. He called his new style “spiritualized sound.” “Each movement focuses on one or two notes that slowly begin to unravel around themselves in an improvisatory manner,” Salli said.

Salli has performed solo and chamber recitals across the United States as well as in Italy and Croatia. She has placed in numerous competitions such as the American Prize, Elise Hall Competition and North International Competition. As an advocate for new music, she has commissioned over 10 new works for the saxophone. She has worked on staff for the National Repertory Orchestra as the Artist Liaison. In addition to Dr. Nathan Nabb, director of the SFA School of Music, her primary teachers include David Dees, Dr. Jan Berry Baker, Dr. John Sampen and Dr. Eric Nestler.