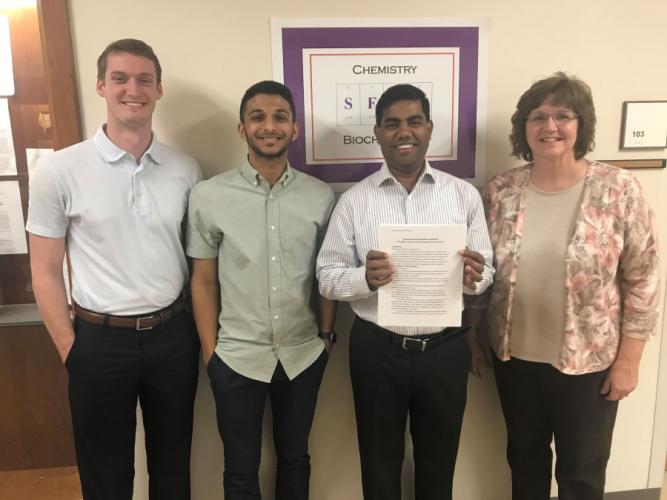 
NACOGDOCHES, Texas — Dr. Matibur Zamadar, Stephen F. Austin State University associate professor in the Department of Chemistry and Biochemistry, has received a patent from the U.S. Patent and Trademark Office for his invention regarding therapeutic treatment of bacteria and cancers, and fluorescence diagnosis.

Zamadar’s invention relates to methods and compositions for therapeutic treatment to slow or stop the progression of bacteria and cancers, and fluorescence diagnosis.

“Traditional cancer treatments, such as surgery, radiation and traditional chemotherapy, have limitations,” Zamadar said. “In general, these treatments lack selectivity for removing or killing malignant tumor tissues and are costly, highly invasive and/or administer toxic treatments.”

Zamadar said studies project worldwide cancer-related deaths will increase 70% by 2040. With cancer-related deaths on the rise, there is a need for improved, nontoxic, noninvasive, low-cost, effective cancer therapy methods enabled by compositions that can be readily prepared without specialized costly synthesis equipment or extensive training.

“This invention relates to multifunctional treatment compositions and methods that can potentially help cure many types of cancer,” Zamadar said. “Our data suggest the invention is very effective at producing reactive oxygen species and nontoxic chemotherapeutic agents in various cancerous cell environments, such as aerobic, anaerobic or H2O2-rich environments in the presence of or absence of light,” Zamadar said.

The invention’s significant advantage is it enables portable treatment and diagnosis under differing field conditions using kits prepared from commercially available materials. These kits can be easily stored, readily transported without activation, and then activated, as needed, at remote treatment sites, such as those in developing countries.

"It generates on-site one or more reactive oxygen species and a nontoxic chemotherapeutic agent selected from the group comprising singlet oxygen, hydroxyl radical, chemotherapeutic agent Juglone, or its derivatives, or combinations thereof,” Zamadar said. “This suggests that a single composition kills cancer cells via multiple mechanisms within a short treatment time, typically minutes. The composition is only effective against cancer cells. It is nontoxic to healthy cells at a low-dose level and can be used multiple times with no side effects.”

Zamadar began the patent application process in 2018. This is the first patent granted to a professor in SFA’s College of Sciences and Mathematics within the Department of Chemistry and Biochemistry.

“The patent would not have been possible without support from SFA faculty members and students,” Zamadar said. “Dr. Michele Harris, associate dean and professor in the Department of Chemistry and Biochemistry, and undergraduate students, Aqeeb Ali and Jacob Herschmann, provided technical support throughout the patent process, and retired patent attorney Tom Pruitt provided his expertise to file the patent application.”