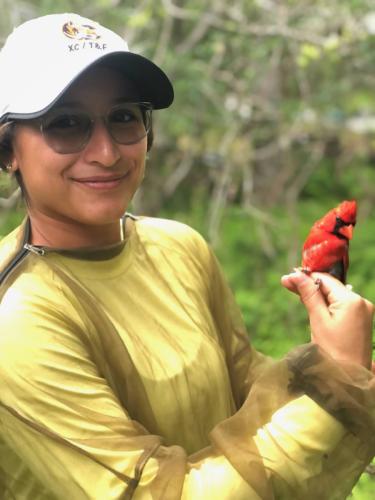 
NACOGDOCHES, Texas — The arrival of spring in Texas heralds the return of diverse migratory species, such as the ruby-throated hummingbird, purple martin, chuck-will’s-widow and yellow-billed cuckoo, just to name a few. Located within North America’s central migratory flyway, Texas provides a diversity of habitat critical to the survival of millions of birds on their biennial journey to breeding or wintering habitats.

As welcome as these species are to the state, Texas is not immune to data indicating a significant loss in avian abundance and diversity during the past 50 years.

“I know for me, not just being a student, but also being a birder for about 14 years, I’ve noticed a decline in birds,” said Eamonn Thurmond, who is pursuing a Master of Science in Forestry at Stephen F. Austin State University. “When the 2019 Rosenburg paper came out, it seemed par for the course. It didn’t surprise us, but it was very much disappointing.”

The 2019 paper Thurmond is referring to was a collaborative research effort across nine separate universities, governmental agencies and organizations that found an approximate net loss of roughly 3 billion birds since 1970. Currently, Thurmond is one of three SFA forestry graduate students conducting research to continue to shed light on current avian population trends, as well as land management practices that benefit these species.

Thanks to a grant from the National Fish and Wildlife Foundation, Thurmond, under the direction of Dr. Rebecca Kidd, SFA associate professor of forestry, will analyze 150 study sites within bottomland hardwood forests across Louisiana, Arkansas and Mississippi. These sites, located within the Mississippi alluvial valley, are part of a national effort to restore bottomland hardwood forest ecosystems that have been drastically altered or lost due to anthropogenic, or human-based activities.

Through initiatives such as the Wetland Reserve Program, a voluntary program assisting landowners in protecting, restoring and enhancing wetlands and riverine ecosystems, progress has been made in restoring critical bottomland hardwood forest habitat. On these sites, active forest management practices, such as invasive species control, thinning and regeneration harvests, complement naturally occurring disturbances, such as flooding and falling trees.

“The goal of this research is to see how avian communities are changing or responding over time to the intensity of forest management from the early successional stage to the ideal, mature forest stage,” Thurmond said.

In order to document these changes, Thurmond will deploy automated sound recording units at 75 different forest sites for two summers. These waterproof, compact recording units can be programmed to record at specific times of the day for set lengths of time and later analyzed to discern which species are utilizing the study site.

“On one of my recordings, I started laughing because I got 11 different species vocalizing within the first 20 seconds of the recording,” Thurmond said with a smile. “The fact you can get 11 species within that short time should emphasize how many birds are there, and it’s a good metric for looking at communities present.”

Thurmond explained that complexity within the vertical forest structure is typically best for forest birds because it provides a variety of resources for multiple species. His findings will help guide foresters in making future management decisions to benefit songbirds within these restored bottomland forests.

Closer to home, forestry graduate student Liam Wolff is investigating how forest conditions affect an avian species recognized by the Texas Parks and Wildlife Department as a species of conservation concern. His research, directed by Dr. I-Kuai Hung, Lacy H. Hunt Professor of geospatial sciences at SFA, is supported in part by the State and Tribal Wildlife Grants Program.

Bachman’s sparrows are habitat specialists that rely on open pine woodlands with grassy understories like those historically found across East Texas. According to the Cornell Lab of Ornithology, populations of this small, brown songbird have declined by 76% during a span of 44 years. This is due in large part to land conversion, fire suppression and other alterations to native forest composition.

“The strongest argument for the protection of this species is that it is a bioindicator and occurs in the same habitat as the endangered red-cockaded woodpecker,” Wolff said. “So, if you’re conserving this species, there’s a whole other slew of species you’re also protecting — and not just birds. There are some plants associated with these habitat types, and in Eastern populations, you have the federally threatened gopher tortoises and Louisiana pine snakes.”

Wolff’s study sites are located across public and private lands throughout the post oak savannah and piney woods ecoregions of East Texas.

During multiple seasons, Wolff will examine the spatial and temporal factors that influence the occupancy, phenology and detection of Bachman’s sparrows in East Texas. This includes canopy cover, forest basal area, percent ground cover of grasses, leaf litter and more.

“These data can inform agencies and land managers on habitat preferences of Bachman’s sparrows, as well as occupancy and distribution of this species of greatest conservation need in Texas,” Wolff said. “We’re also looking at a regional-scale predictor of how far a surveyed plot is from a source population. What that can imply is whether habitat fragmentation is affecting whether or not these birds are able to move between certain areas.”

For example, Wolff said there are a number of restored habitats in East Texas capable of supporting the Bachman’s sparrow, but the species has not been detected.

Automated sound recording units are again key to detecting the presence or absence of the Bachman’s sparrows. Thankfully, Wolff and other students have access to software to assist in sorting this massive amount of audio.

“In addition to the audio, the software represents sound visually,” Wolff said. “If you familiarize yourself with the spectrogram signature of your species, you can just scan through and visually look for that signature. Fortunately, the Bachman’s sparrow signature is pretty unique.”

At the Welder Wildlife Refuge in South Texas, forestry graduate student Alejandra Martinez will analyze six years of data collected over a 12-year period through a MAPS station within a riparian woodland to determine occupancy and population trends of birds.

“The acronym stands for Monitoring Avian Productivity and Survivorship,” Martinez explained. “MAPS is one of the first resources used to collect long-term breeding data on the land bird populations of North America, including productivity indices.”

There are more than 1,300 MAPS stations across North America, and data collected at each of these stations is publicly available.

During a span of three years, Martinez, under the direction of Dr. Jessica Glasscock, SFA assistant professor of forest wildlife management, will gather comprehensive data from birds collected through mist nets as outlined by the established MAPS protocol. She will then compare her data to previous years to determine if there are any population trends or shifts occurring.

She notes that initial findings indicate a decline in common species, such as the Northern cardinal, known for its bright red feathers and expansive range across the United States.

Additionally, Martinez will compare the effectiveness of automated sound recording units and established MAPS protocols in determining occupancy and time of detectability.

“We want to see if the recording units are more efficient because we’re not going to catch every single bird that may be present,” Martinez said. “When we’re not running our nets and collecting birds, we’re supposed to be listening to document species flying over. Hopefully, with the recording units, we can pick up a more complete population or complete community of avians in this riparian corridor.”

For more information on this and other research occurring through the Arthur Temple College of Forestry and Agriculture, visit sfasu.edu/atcofa.