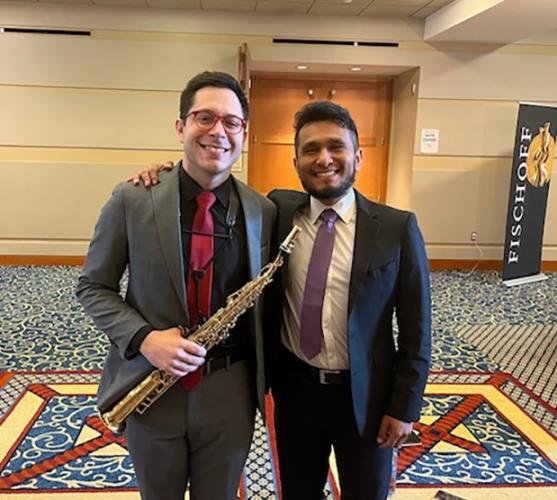 Chapa is a performer and educator who focuses on promoting creativity and opportunity through collaboration. He performs regularly as a member of Mixed Media and Khroma Quartet. In addition to the Fischoff National Chamber Music Competition prize, his performances earned first prize at the 2022 Coltman Chamber Music Competition. Chapa just completed his first year of the D.M.A. degree in saxophone performance at the University of Georgia studying with Dr. Connie Frigo. Previous mentors include Jean-Michel Goury at the Conservatoire à Rayonnement Régional de Boulogne-Billancourt, France; Debra Richtmeyer at the University of Illinois; and Dr. Nathan Nabb at SFA.

Barrientos, a saxophonist and educator, has a master’s degree in saxophone performance from the University of Iowa, where he studied under the tutelage of Dr. Kenneth Tse. Prior to moving to the Midwest, he completed his undergraduate studies of music education at SFA as a student of Nabb. Barrientos currently holds a private saxophone studio consisting of more than 80 students in the Dallas/Fort Worth metroplex, and he is director of the Texas Youth Saxophone Ensemble.

Both Chapa and Barrientos speak highly of their time at SFA.

“SFA was inviting, cultivating and special,” Barrientos said. “I was fortunate to have studied under my former saxophone professor, Dr. Nathan Nabb. It was because of him I was able to come out of my comfort zone and be able to better serve my community. The SFA School of Music ignited my passion for music, and I hope to do the same for all of my students.”

“SFA was an integral part in my early music career,” Chapa said. “To be honest, I wasn't certain about which path I wanted to take in music after graduating high school, but I was dedicated enough to find a path that aligned with my interests and goals. The School of Music offered a variety of academic courses and top-tier performing ensembles that I was able to explore in the four years living on campus that helped me align my strengths and skills with viable career options.

“The faculty I spent time with served as amazing mentors to me and established solid musical training that developed essential fundamentals in my artistic development,” he added. “Most of my favorite memories were from the three years I spent in the Lumberjack Marching Band and various quartets formed within the saxophone studio.”