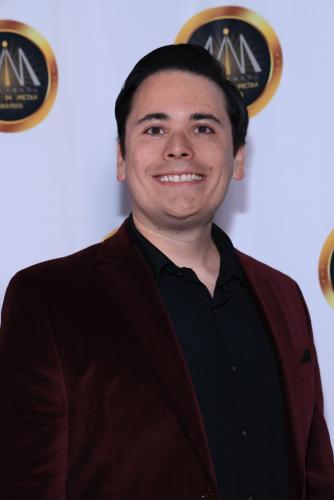 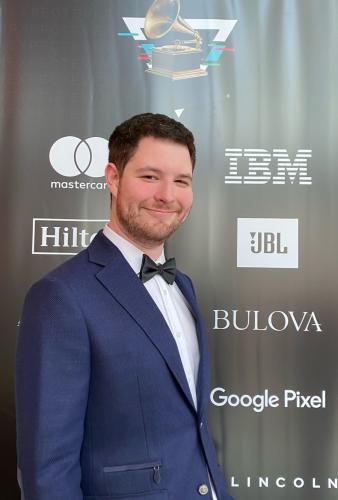 
NACOGDOCHES, Texas – In the world of music composition, two Stephen F. Austin State University graduates are each garnering national and international attention as composers for some of the world’s most popular productions.

Lance Treviño and Mason Lieberman earned nominations in this year’s Hollywood Music in Media Awards – Treviño for Best Horror Score for “Scream Legacy” and Lieberman as a member of a team that was nominated for Best Score for a mobile video game, “PUBG Mobile.” They both live in Los Angeles, California, where the SFA graduates, who first met as undergraduates, remain colleagues, project collaborators and friends. Treviño was a groomsman in Lieberman’s wedding a few months ago.

An award-winning composer, audio director and producer, Lieberman is known for his contributions to the gaming and anime zeitgeist. He was part of the “Forbes 30 under 30,” gaming category, for the 2022 list. He is currently a senior composer and game audio supervisor for Tencent, the largest video-game company in the world, where he oversees much of the output of Lightspeed Studios, one of its largest companies. He was part of the Lightspeed audio team for music direction as part of two “Best Song in a Mobile Game” nominations for “PUBG Mobile” and “Game for Peace!” He’s on the faculty at University of Southern California, in addition to his role at Tencent. His work in LA and around the globe was the subject of a feature article in the Spring 2021 edition of Sawdust, SFA’s alumni magazine.

With his own emerging place in the spotlight, Treviño is also garnering accolades as a composer who crafts customized music for many of the most popular productions of our time. Some of his contributions include the thrilling soundscapes in AMC's “The Walking Dead,” the JRPG-inspired music of the Japanese anime “Beyblade Burst Evolution,” the post-apocalyptic score of Warner Brother’s “Mortal Kombat Legends,’ and the hybrid sounds of Apple TV's “See.” “Scream Legacy” is his most recent feature score. He was the lead composer for the Houston-based production, initially conceived as a fan film but finding success among the horror fan community.

Both Treviño and Lieberman are former students of composition professor Dr. Stephen Lias. Treviño earned his bachelor’s in music composition in 2012, complete with a year studying abroad at the University of Tasmania in 2011. He’s has been living and working in Los Angeles for more than a decade, starting in August 2012 when he arrived in LA as a student in the USC Film Scoring program, graduating the following year.

Like many of his ventures, Treviño said his “Scream Legacy” project had connections to SFA. “The score mixer I hired for the soundtrack was my close friend and ‘Tasmanian legend,’ Caleb Miller, whom I met while studying abroad as the first student in the UTAS-SFA exchange.”

Treviño and Lieberman have a long history of collaborating, beginning with Treviño’s first “paid gig” he completed for the SFA College of Forestry. “It was for a McIntire-Stennis informational video called ‘The Driving Force’ starring Brad Maule,” Treviño said. The McIntire-Stennis (M-S) Cooperative Forestry Research Program has provided fundamental support for creating and strengthening forestry research and graduate training efforts at colleges and universities across the nation for 50 years.

Professionally, Treviño does a lot of freelance composition for various Hollywood productions. Most notably, he’s been writing additional music for “The Walking Dead,” “See,” “Beyblade Evolution,” “Snowpiercer,” “Hanazuki” and “Mortal Kombat Legends.” “‘Beyblade Evolution’ was another SFA collaboration where I hired Mason at the 11th hour to record and eventually compose alongside me,” Treviño said. “There are a lot of SFA threads in that story.” Treviño is also currently teaching as a distance professor at SFA, helping students learn video game scoring and digital orchestration.

Treviño was first connected with the popular “Sparks and Shadows” shows through a letter of recommendation from Edward Trybeck, orchestrator for “The Walking Dead,” “Agents of Shield” and other TV shows, video games and feature films. Lieberman introduced Treviño to another film, television and video game composer, Sam Ewing, who furthered Treviño’s involvement with “Sparks and Shadows.” Treviño later hired Lieberman as a recording musician for “Walking Dead.” “We really have just sorta gone back and forth our entire careers,” Lieberman said.

Commenting on his former students’ recent Hollywood Media nominations, Lias stated, “All you have to do is scroll through the list to see what amazing company they’re in.”

The Hollywood Music In Media Awards is the first award organization to honor original music (song and score) in all visual media from around the globe including film, TV, video games, trailers, commercial advertisements, documentaries and special programs. The HMMA nominations have historically been representative of the nominees of key awards shows that are announced months later. The HMMA also celebrates emerging, independent artists and music influencers from around the globe for creative and innovative contributions, according to information at hmmawards.com.

Treviño says he owes a lot to the connections he made while at SFA.

“Collectively, Mason and Dr. Lias have been instrumental in my professional trajectory, each in different ways,” he said. “One of the best things I take away from my Lumberjack experience is the strong sense of community built through the phenomenal opportunities Dr. Lias established for his students. It was an inspiring time full of feature film collaborations, foreign exchange programs, and orchestral competitions, all of which helped to shape my career in different ways.”

For more information about the composers, visit their respective websites at lancetrevino.com and masonlieberman.com.