SFA to present Golding’s iconic ‘Lord of the Flies’ 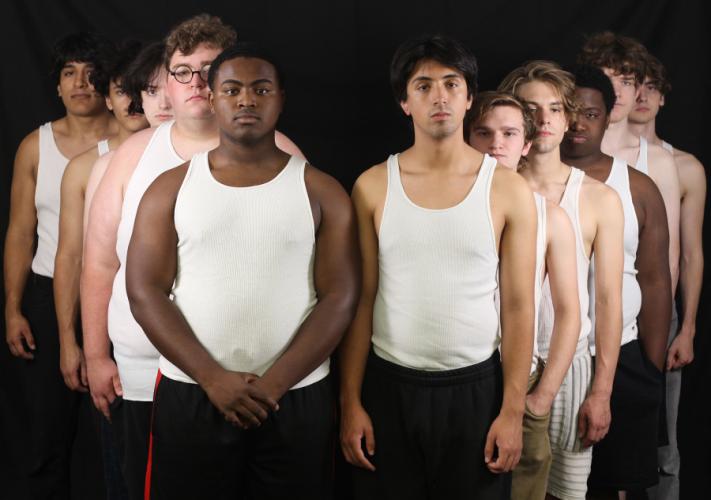 
NACOGDOCHES, Texas – The story about a group of young boys, trapped on a desert island, who discover the darkness of human nature will come to life on stage when the Stephen F. Austin State University School of Theatre and Dance present “Lord of the Flies” Nov. 3 through 6 in Kennedy Auditorium on the SFA campus.

The 1954 novel by Nobel Prize-winning British author William Golding, “Lord of the Flies” has been a staple on high school reading lists for decades. Even those who have not read the novel are well acquainted with its title and storyline, giving it what School of Theatre and Dance Director Cleo House Jr. describes as “iconic” status.

“It’s a big show, with characters who do larger-than-life things,” said House, who is the play’s director. “Even though there’s plenty of drama, the comedy in the show is very present. We picked this show because it gives students an opportunity to do something very different from a traditional play.”

Evacuated from a war-torn world and marooned on a deserted island when their plane crashes, a group of teenage British boys find themselves battling for survival with no adults to help them. Struggling with inner demons and external fears, and driven by a primitive blood-lust, their childish “games” lead to tragic consequence.

“The play asks the question: what happens when people are left to their own devices without the bounds of societal norms?” House asks. “It also explores what happens when we stop seeing each other as people. When I spoke initially with the cast, I told them the play is rooted in illusion: What is real? Is it the societal norms? Is it the freedom of the jungle, or the fear of the jungle? My approach with the play is to explore all of these questions.”

With a cast of mostly first-timers in an SFA Mainstage Series show, including a freshman lead character, House is looking forward to guiding students in building three-dimensional characters in the play, adapted for the stage by Nigel Williams.

“In a show like this, you have to give a lot of energy and emotion,” he said. “The show is also very, very physical. The actors are running, crawling, fighting, laughing, crying, dancing. It has been a journey. The actors are constantly working to build their stamina. And, characters are speaking in British accents, which is always a challenge.

“The setting for the show is quite large with many different locations,” he added. “In rehearsals, we had to get creative about how we used the space.”

House considers this presentation of “Lord of the Flies” a PG-13 play, “but anyone from 12 years old and up can find joy in the ‘adventure’ the play offers,” he added.

“And, I hope everyone will come to see how amazing our students are,” he said. “The actors in the show have brought such a high level of energy and excitement. They have been pushing each other to be better in and out of rehearsal. They started memorizing their lines well before the due date, and they are always asking questions and seeking ways to be better. They are simply incredibly hard workers. Yes, they are talented, but it is their commitment to each other and the process that makes them great artists.”