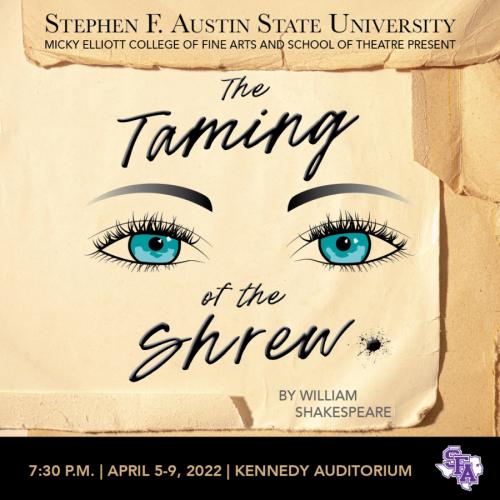 The SFA School of Theatre will present William Shakespeare’s “The Taming of the Shrew” at 7:30 nightly Tuesday through Saturday, April 5 through 9, in Kennedy Auditorium on the SFA campus.


NACOGDOCHES, Texas – A combination of bare-bones Brechtian and physical commedia styles is what theatre patrons will experience when attending the Stephen F. Austin State University School of Theatre’s presentation of William Shakespeare’s “The Taming of the Shrew.”

Exploring the social and economic perspectives of romantic relationships of the 17th century  laced with Shakespearian slapstick, “The Taming of the Shrew” will be presented at 7:30 nightly Tuesday through Saturday, April 5 through 9, in Kennedy Auditorium on the SFA campus.

The School of Theatre had not produced a work of Shakespeare since the fall of 2019, leading theatre Professor Angela Bacarisse to select one for this year’s Mainstage Series.

“I felt we needed to add a classic – something that used heightened language – as part of our educational mission,” said Bacarisse, the play’s director. “We are also going to have fun with the fact that it’s a comedy.”

In the play, three gentlemen wish to marry Bianca but cannot court her until her older sister Katherina marries. The eccentric Petruccio agrees to marry the reluctant Katherina and finds himself well matched in stubbornness and intellect. In the end, three couples are wedded, but the questions becomes: Who is happily married?

“Kate and Petruchio are both hardheaded individuals who are used to getting things their own way, so naturally they butt heads,” said Bacarisse, adding from the play, “And where two raging fires meet together they do consume the thing that feeds their fury: though little fire grows great with little wind, yet extreme gust will blow out fire and all.”

Working with Bacarisse is Slade Billew, assistant professor of theatre and combat/intimacy director for the play.

“There are some moments in the play that call for this type of physicality,” Bacarisse said, “and there is some kissing when the characters finally come to terms with each other.

“We’ll be doing a lot of clowning, pantomime and physical comedy, with characters wearing silly disguises, and there’s tumbling, juggling and gymnastics.”

From a design perspective, Bacarisse describes the production as “bare-bones Brechtian” style scenery with a commedia style of acting. She asked the costume designer, lecturer James McDaniel, to create costumes that blend modern and Elizabethan elements.

Among the challenges for students in producing any Shakespearian play is language, according to Bacarisse. “The actors have to understand what they are saying, and clearly wrap their mouths around the words,” she said. “This is what makes the production accessible. We are accomplishing this with the help of Assistant Professor Kristen Blossom, who teaches voice and acting for Shakespeare in the School of Theatre.”

With the exception of very young children, “The Taming of the Shrew” and its comedy will appeal to most audiences.

“My son was watching and enjoying Shakespeare by age 10,” Bacarisse said. “Younger people aren’t afraid of Shakespeare because they haven’t been taught that they don’t understand it yet. When you watch Shakespeare’s plays instead of reading them, it makes a great difference.”