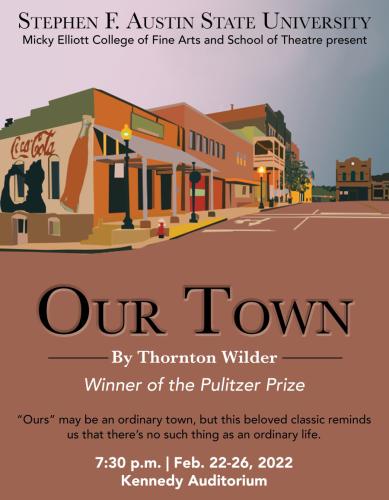 The SFA School of Theatre will present Thornton Wilder’s “Our Town” at 7:30 nightly Tuesday through Saturday, Feb. 22 through 26, in Kennedy Auditorium on the SFA campus.


NACOGDOCHES, Texas – The everyday lives of the citizens of the small fictional American town of Grover’s Corners will come to life on the campus of Stephen F. Austin State University when the School of Theatre presents the multi award-winning play by Thornton Wilder, “Our Town.”

Presented at 7:30 nightly Tuesday through Saturday, Feb. 22 through 26, in Kennedy Auditorium on the SFA campus, “Our Town” is a winner of the Pulitzer Prize for Drama, Drama Desk Award for Outstanding Revival and Tony Award for Best Revival and is universally acknowledged as a classic of American drama. Three-time Pulitzer Prize-winning playwright Edward Albee called it “a masterpiece….probably the finest American play written so far."

Although “Our Town” is one of the most frequently produced plays in the American theatre, it doesn’t have much of a plot, and it doesn’t tell a “traditional dramatic story in a traditional way,” according to Scott Shattuck, professor of theatre at SFA and the play’s director. And that’s one reason why Shattuck selected this play to be presented in this year’s Mainstage Series.

“By describing and performing the gentle beauty of everyday life in small town America at the turn of the 20th century,” Shattuck said, “the play somehow entrances audiences at the breakfast tables of two neighboring families and a drugstore soda fountain where two shy teenagers fall in love over strawberry egg creams. Our ambition in mounting this production is to be as simple and authentic as this most honest of plays and its humble characters.”

Additionally, because the School of Theatre has made its temporary home in Kennedy Auditorium while the Griffith Fine Arts Building, which houses W.M. Turner Auditorium, is under renovation and expansion, “Our Town” is well-suited for the small, unassuming stage of Kennedy Auditorium.

“It was written to be performed without a traditional stage set, and while our Mainstage seasons are being produced in a lecture hall rather than a theatre, it suggested itself as a play that might be appropriate to mount with a minimum of scenic production values,” Shattuck said. Yet, the play has some surprises in store, Shattuck explained, as actors are called upon to “narrate and lecture, interrupt their own action, change characters from one scene to the next, and simultaneously embrace the artificiality and the genuineness of the play.”

Shattuck describes Wilder's theme in “Our Town” as “clear as a bell, so I needn’t state it here.” In his book “Another Day’s Begun: Thornton Wilder’s Our Town in the 21st Century,” Howard Sherman wrote: “…it is a charge to every audience to think about…how they approach life, to appreciate life and appreciate others while we have them."

Among some people, “Our Town” has a reputation like that of “a sweet-but-dull elderly relative who spins sepia-toned nostalgia at holiday dinners,” according to Shattuck. Although there is no cursing, no violence, no sex, no drugs and minimal references to smoking and drinking, this three-act play “will be best appreciated by adults who have experienced the heartache as well as the joy of a life fully lived,” he said.

“Our challenge is not only to convey Wilder’s message of the profound significance of apparently insignificant experience, but to embody it,” Shattuck said. “Without a lot of colorful scenery, explosive special effects, fancy costumes, fierce conflict, hair-raising suspense, or laugh-a-minute hijinks, we’ll have little to rely on but the heartfelt honesty of our actors and the richness of Wilder’s writing. Still, we promise an evening that will be anything but boring.”