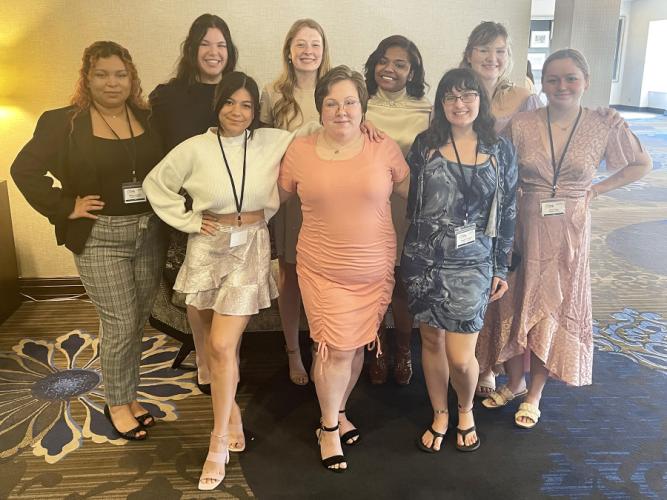 
NACOGDOCHES, Texas — Stephen F. Austin State University student journalists received 25 awards from the Texas Intercollegiate Press Association for their performance at a statewide journalism competition and for their contributions to campus media outlets throughout 2021.

“Our students work exceptionally hard throughout the year to produce high-quality content for our student publications and other media outlets, and accolades from the Texas Intercollegiate Press Association reinforce the value of that work and the importance of student media’s role on a college campus,” said Amy Roquemore, SFA director of student publications and divisional media. “I’m obviously very pleased with their latest recognition, but I’m even more proud of the hard work our students put in each day to keep the campus community informed and to provide a forum for discussion of important issues facing our campus and our society as a whole.”

Meaghan Morton, Stone Fort editor-in-chief and graduate assistant for the Student Publications/Divisional Media department, attended the conference this year for the fifth time. Graduate students are not eligible to compete; however, Morton attended workshops and assisted undergraduates in navigating the conference and preparing for competition.

“I like to describe TIPA as a revival for the journalist’s spirit,” Morton said. “These students are truly put on the spot in their competitions, which often present them with the most challenging journalistic obstacles they have been up against so far in their career. Watching them network, grow in their field and gain confidence as young journalists is rewarding.”

Coker, a senior, said she was grateful for the opportunity to attend the annual TIPA conference and competition, which was canceled in 2020 and 2021 due to the pandemic.

“Participating in the TIPA convention was such a rewarding experience in itself,” she said. “Besides the fact that Student Publications staff members earned several awards, the staff deserves every ounce of recognition they get, and it’s so nice to applaud them for their hard work with a fun learning experience.”

Established in 1909 at Baylor University, TIPA is the largest and oldest collegiate press association in the United States. The organization works to recognize excellence in campus media and open channels of communication and cooperation among student media programs at two and four-year universities in Texas.

The following is a complete listing of TIPA awards SFA students earned for work produced during the 2021 calendar year: