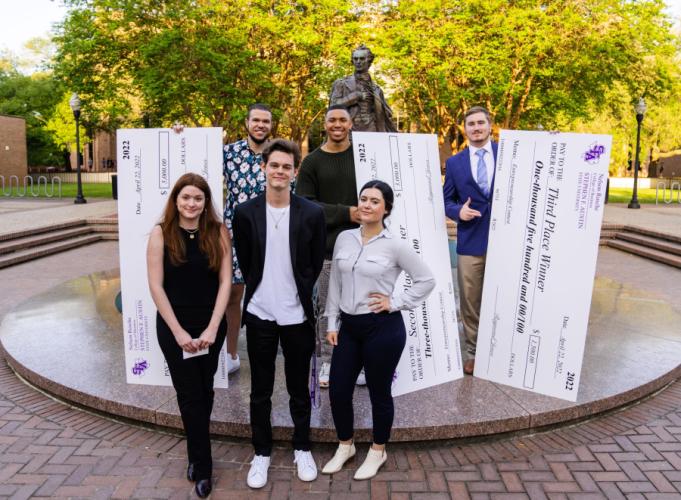 The competition, which was open to all SFA undergraduate and graduate students, drew 30 entries. They were narrowed down to six for the final competition.

“The competition was really fierce,” said Dr. Raymond Jones, assistant professor of entrepreneurship and strategy at SFA. “We ended up with six finalists when we couldn’t narrow down the entries to five, and we paired each of them with a mentor from the Nacogdoches area to help fine-tune their pitches for the competition.”

Contestants were judged on the market opportunities for their businesses as well as their situational awareness, pitches, business models and go-to-market strategies.

“This competition was outstanding! The final six contestants were all well prepared and did a great job with their pitches,” said Gregory Price, chief financial officer of Decisio Health in Houston, an angel investor and one of the competition judges. “It takes a lot of research, creativity and self-confidence to get up and pitch an idea to a room full of more than 75 people.”

Price said selecting the top three pitches was difficult because each student’s idea was unique and “viable ones that can be carried forward to fruition.”

Other judges for the competition were Taylor Kovar, CEO and founder of Kovar Wealth Management in Lufkin, and Larissa Philpot-Brown, president and CEO of the Nacogdoches Economic Development Corporation.

The first-place prize of $5,000 went to Reefvita, a sea moss smoothie business developed by Stephan McLawrence, a graduate student in finance from Carriacou, Grenada. General business sophomore Quinton Williams of Dallas earned the $3,000 second-place prize with his apparel business event QC B5 Beauty Pageant, and the $1,500 third-place prize went to entrepreneurship major and senior Ryan Waugh of Austin for his educational video game Play Gov.

“I learned so much from this competition, including the dilemmas I may face and other opportunities I can explore in the industry I will be competing in,” said McLawrence, whose pitch touted the health benefits of his smoothies’ main ingredient: the sea moss grown on ropes in the waters surrounding his home island. “Additionally, I received important feedback about my product and its mission from potential customers in attendance.”

McLawrence’s mentor, Sarah Gallander, who graduated from SFA in 1999 with a Bachelor of Science in dietetics and nutritional sciences, focuses on functional nutrition for her clients at The Wellness Matrix.

“Being able to work with a nutritionist and dietician who also runs a successful business gave me insight into the different facets of this particular type of business and helped me win the competition,” McLawrence said. “Mrs. Gallander was an absolute pleasure to work with and is a phenomenal mentor. She devoted a lot of her time and energy into ensuring my pitch was expertly presented, for which I cannot thank her enough.”

Gallander added that the competition showed how people want to invest in people.

“The importance of building your network, beginning with your local community and alumni, is a valuable resource that will lead to future support and success,” she said. “I love seeing the talent SFA has the privilege of grooming.”

Jones said the competition will be back next year.

“The Lumberjack Entrepreneurship Competition is an outlet for SFA students to nurture and develop their entrepreneurial spirit, as well as for the university to highlight the amazing ideas our students have and the things they are doing,” Jones said. “With the help of so many faculty and community members, these students have learned how to put their ideas into practice in the real world.”