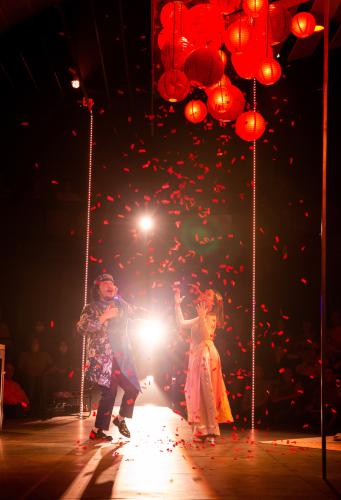 
NACOGDOCHES, Texas – Stephen F. Austin State University School of Theatre alumna Mai Lê continues to enjoy professional successes in the Houston area – this time as an actor in a play she co-wrote.

“Song Of Me,” created and written by Mai Lê and Đạt Peter Tôn and directed by Tôn, enjoyed a successful debut May 27 through June 12 at Stages, Houston’s sixth largest nonprofit performing arts producer.

The two-person show starring Lê and Sergio Mauritz Ang is the story of  brother-and-sister duo Philip and Luci as they reunite on the eve of Philip’s wedding to his partner, Nathan. Over some egg rolls, they plan, reminisce, and clash in the way only siblings can as they struggle to find their own voices. Balancing culture and identity with humor, the two unpack their past and pave a new way forward together. Stages press described it as “a jubilant world premiere about family, tradition, Vietnamese cooking, and growing up in Houston from two of the city’s most exciting young artists.”

Lê and Tôn met in 2019, and they both agreed they had a deep desire to see more Asian American and Pacific Islander stories on stage.

“I had a one-woman play idea that I pitched to him, and he told me he wanted to collaborate with me, whether it was being a designer, director, etc.,” Lê said. “That conversation eventually morphed my idea of a one-woman play into a two-person show.

“We had a lot of fun talking about how he and I have very similar experiences, being the children of Vietnamese refugees,” she said. “But because I am a CIS straight woman, and he’s a CIS queer man, we have a lot of different stories, too. So, we wanted to explore how two people can live under the same roof, but have incredibly different experiences growing up, through a brother-and-sister dynamic.”

Among one of the more unique and challenging aspects of the show is actually cooking on stage.

“We literally cook egg rolls on stage, on a fully functional kitchen island,” Lê said. “We cut carrots, onions, jicama, mushrooms; mix it into raw pork; season it with salt, pepper and fish sauce; roll them in wrappers; and then fry them in hot oil on stage during the show. And then we eat them. So, the whole audience in the house can see the chopping, hear the oil bubbling, and smell the egg rolls as they're cooking. We've been told it's incredibly mesmerizing to watch.”

Lê said she and Tôn wrote “Song Of Me” as “a love letter to us, to the people who look like us, and the people who love us and want to know more about us.” Ultimately, the show explores and celebrates the intersection of their identities as Asian Americans in Houston.

“Peter and I lament that we never had this kind of representation in entertainment growing up,” she said, “so to see Asian people our age, but also Asian high school students, come out to the show and be affected so positively by it is such an honor, and we are so grateful for the community support.

“The reception we've had from folks in the AAPI community here has been wonderful,” she said. “We've gotten a lot of people telling us that they feel seen in stories they didn't realize they were waiting for. Many people felt represented and told us that it felt like they were dropped right back into their living room when they watched Philip and Luci talk.”

Lê described the three years it took to write “Song Of Me” as “incredibly fruitful, and we're excited to see what the next steps are for our script.”

Shortly after receiving her Bachelor of Arts in Theatre from SFA, Lê moved to Houston in the summer of 2013. Since then, she’s been seen around the local entertainment scene in theatre productions and readings, film festivals, commercials, and web ads, and she was featured in the Houston Press’ article: “Houston’s Up and Coming Actors 2019: Razzle, Dazzle and a Whole Lot More.”

She was the host for Space Center Houston’s “Explorer Camp TV,” a show dedicated to science and space exploration learning, as well as a former writer and actor for Comedy Club Houston’s sketch comedy group, The Astronutz. She is a voice actor for Sentai Filmworks. Her first feature film, “Acid Test,” is currently screening at select film festivals. She is represented by Pastorini-Bosby Talent.