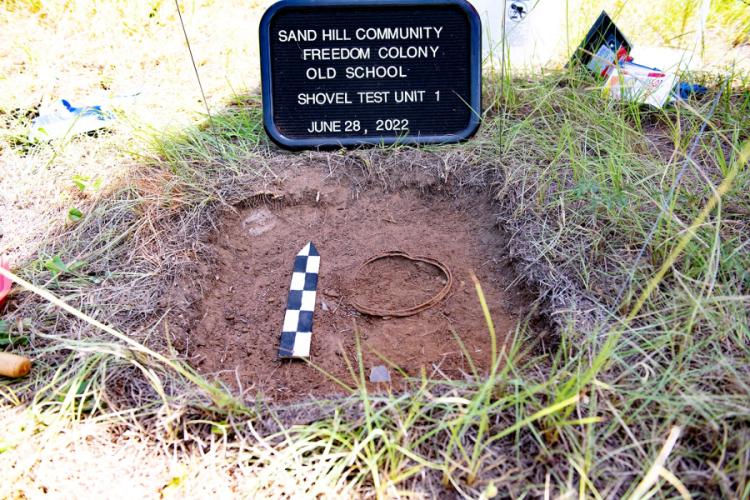 The first test unit dug during the Sand Hill community archeological project. Found in the test unit were broken glass pieces believed to have been from a school window, nails, and a lid from what could have been a paint or tar can. 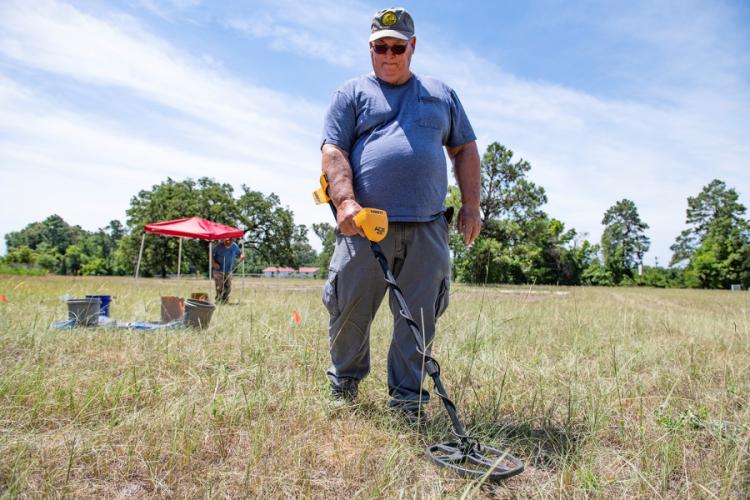 Volunteer archeological steward John Jefferson uses a metal detector to canvas where the Sand Hill community school was believed to be located. Group members began the project by canvasing and marking areas where they hit a target. 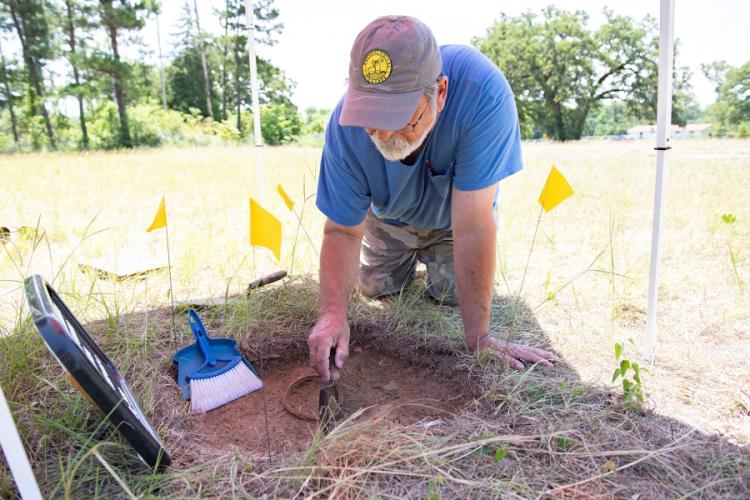 Volunteer archeological steward Keith Stephens uses tools to inspect the initial dig, or test unit. Found in the test unit were broken glass pieces believed to have been from a broken school window, nails, and a lid from what could have been a paint or tar can. 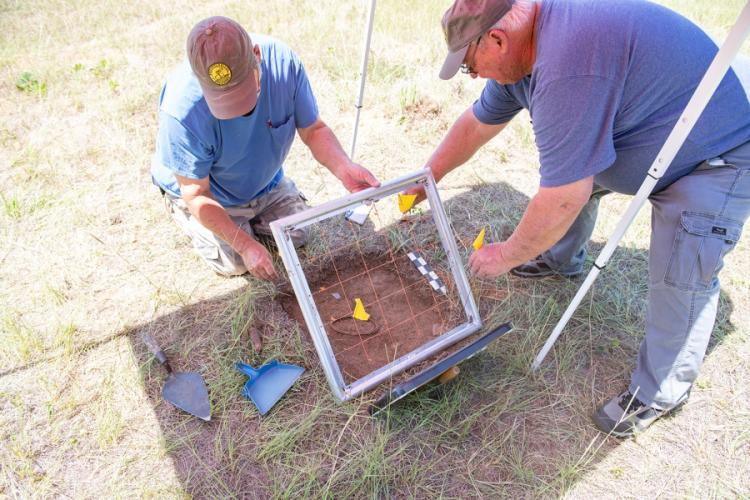 Volunteer archeological stewards Keith Stephens, left, and John Jefferson place a grid over the test unit. The project is to introduce the Sand Hill community to the idea of learning about their past by using archeology.

Tucked between Melrose and Chireno along Highway 21 sits Sand Hill, a community established as a freedom colony — those in which African Americans settled after they were freed. To date, there are about 500 freedom colonies recorded in Texas.

According to Avery, researchers of that era often neglected or overlooked freedom colonies, leading to a lack of historical resources cataloging their rich cultures.

“The project is meant to introduce the Sand Hill community to the idea of learning about their past by using archeology,” Avery said. “There are not many historical documents about them, so what we’re doing here is providing information for the documents.”

As part of a grant, Avery, along with stewards and volunteers Lori Horne, Keith Stephens, John Jefferson and Archie Rison Jr., began the dig on June 27 at a location in the community that was believed to have been a Rosenwald School ¬– a school built through support by the Rosenwald Fund, which was established to construct schools for African Americans between 1920 and 1932.

The group began the project by canvasing the area with a metal detector and marking areas where they hit a target. After that, they used ground-penetrating radar to look for areas of disturbed earth across the site.

It didn’t take long to find the first artifacts.

About an inch into the sand-filled, weed-ridden earth of their first test hole, the group found broken glass believed to have been from a school window, nails, and a lid from what could have been a paint or tar can.

“We are finding a surprising number of artifacts here,” Avery said.

Rison, a 1971 SFA graduate with a Bachelor of Arts in sociology, recalled fond memories of the short travel from his hometown Nacogdoches to Sand Hill to visit family on his mother’s side, as well as participating in the area’s ample hunting scene.

As what he considered a “kid from the big city of Nacogdoches” compared to the “country” of Sand Hill, Rison remembered it as a place that wasn’t rich financially but was rich in spirit.

“This was a thriving Black community at one time. It was really thriving. Were they rich? No, but they were rich in culture, heritage and togetherness. If a hog was killed, they didn’t mind sharing it.”

According to Avery, the first couple of days were an introduction, and the bulk of the work will commence when the heat begins to subside.

Avery hopes to present the stories of and artifacts found at Sand Hill in May 2023 during the Aya Symposium, a vehicle for the multidisciplinary exploration of Texas Freedom Colonies held in conjunction with the Texas Purple Hull Pea Festival.

“You learn what people did and what they used back in the day. It’s a learning process of human behavior,” Rison said, referencing the significance of the project.

Anyone who thinks they may have familial ties to a Texas freedom colony and is interested in an archeological project in the community can contact Avery at averyg@sfasu.edu.

For more information about SFA’s Department of Anthropology, Geography and Sociology, visit sfasu.edu/anthrogeosoc.