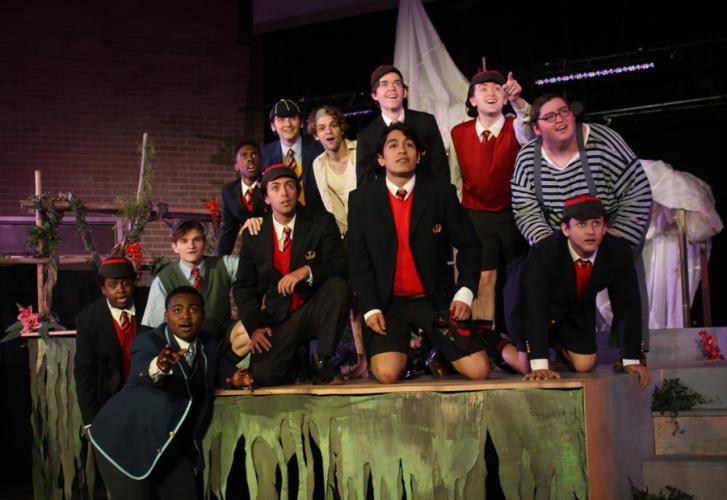 SFA School of Theatre and Dance’s production of “Lord of the Flies” is being considered by Region 6 Kennedy Center American College Theatre Festival to receive an invitation for a performance at its regional festival.


NACOGDOCHES, Texas – Stephen F. Austin State University School of Theatre and Dance’s production of “Lord of the Flies” is being considered by Region 6 Kennedy Center American College Theatre Festival to receive an invitation for a performance at the regional festival next year.

Directed by Cleo House Jr., director of the School of Theatre and Dance, “Lord of the Flies” was presented Nov. 3 through 6 as part of SFA’s MainStage Series. Its nomination follows a tradition of SFA plays earning nominations for festival inclusion. Last year’s SFA production of “Bootycandy,” also directed by House, was one of only six plays selected from throughout a five-state area to be presented at the festival. This year, “Lord of the Flies” is also held in a tie for Director’s Choice and for Respondent’s Choice honors.

“What I love most about participating in KCACTF is that our students get to see the work of others or have their work seen by others beyond the walls of SFA,” House said. “It is important to get outside of our bubble and get feedback from other professionals.”

House believes the KCACTF experience teaches students how to give and receive feedback, and the process of traveling a show and mounting it is “an invaluable experience.”

“Naturally, it is always great to see our students, faculty and staff being recognized for their hard work and creativity,” he said, “but KCACTF has been an important vehicle for making sure that SFA theatre is recognized for the work we do beyond campus. In addition, it serves a vehicle for recruitment. I have found that when students from junior colleges and other universities see us in action, it is a good motivational tool for them in making their decision to study theatre at SFA.”

The regional committee will decide in December which productions will be invited to the regional festival Feb. 27 through March 2 in Abilene.

KCACTF is a national organization affiliated with the Kennedy Center in Washington, D.C. The organization celebrates and encourages excellence in college and university theatre.

For more information about the School of Theatre and Dance, call (936) 468-4003 or visit sfasu.edu/theatre-dance.