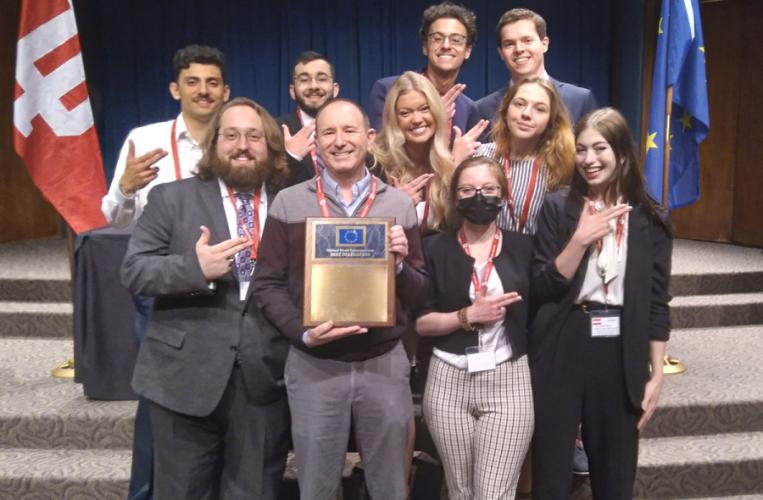 Hosted by Indiana University, the MMEU competition is the second-oldest intercollegiate simulation of the European Union in North America. The purpose of the competition is to increase awareness and knowledge of the EU, its institutions and processes, according to Dr. Steven Galatas, SFA associate professor of government and Model EU faculty advisor.

“The students gained a deeper appreciation for the EU and its role in the world, as well as the importance of the United States and EU relationship in maintaining peace and stability in Europe and globally,” Galatas said.

SFA’s team represented Austria during the competition. Additionally, SFA was asked to assist the University of North Carolina and Florida International University teams who represented Sweden and Belgium, respectively.

The students received their country assignment through a lottery system. The team met regularly beginning in January to review EU legislature processes and research the country’s positions on important or critical issues, including COVID-19 and the ongoing Russia-Ukraine war.

“I learned how important it is for not only politicians, but also voters in the U.S. to speak to one another,” Jennings said. “Consensus and compromise make the foundation of the European Union, and learning how to understand one another is very important. It's something I'll carry with me into my career as a commissioned officer in the U.S. Army.”

During the competition, students participated in five legislative simulations with the goal of negotiating and bargaining between member states to pass legislation for the EU. It also allowed the students to showcase their knowledge of assigned countries’ policies and affairs.

At the end, participants in each of the five legislative bodies and the European Commission are ranked based on their negotiation and bargaining skills and participation in the debates, among other criteria.

For more information on Model EU, contact Galatas at galatasse@sfasu.edu.