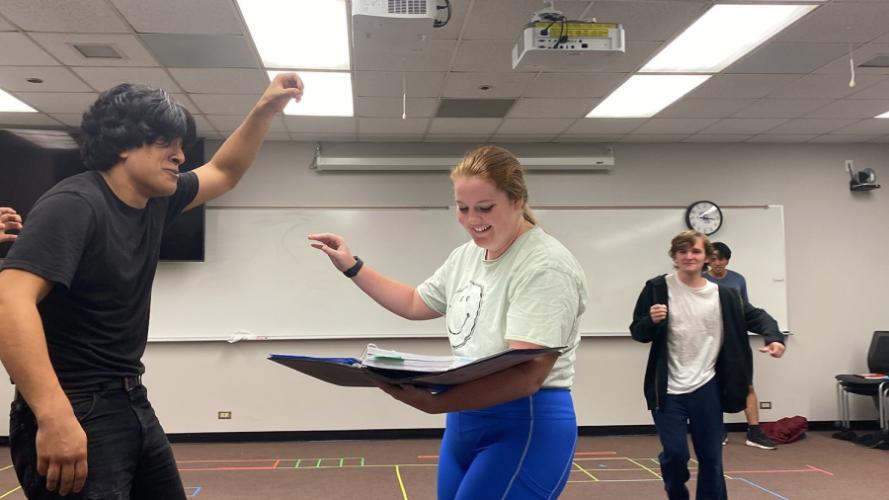 
NACOGDOCHES, Texas – A lot of lines. A number of actors. A huge set. A multitude of props, lights and sounds. The Stephen F. Austin State University School of Theatre and Dance’s presentation of William Golding’s “Lord of the Flies” is setting the stage to be one big show and one exceptional learning experience for SFA student actors and the play’s management team.

Adapted for the stage by Nigel Williams, “Lord of the Flies” will be presented Nov. 3 through 6 in Kennedy Auditorium. It’s the story of a group of young boys, trapped on a desert island, who discover the darkness of human nature. Its extensive script with a lot of moving parts takes this play to another level from the typical collegiate performance, according to Cleo House Jr., director of the School of Theatre and Dance and the play’s director.

“It is always helpful to have as many eyes on things as possible when doing a play this big,” House said. “I’m fortunate to have some talented students on the management team that are assisting me with a variety of tasks. The most fun part of directing is seeing how the rehearsal space is a lab where students are actively learning new things and having old lessons reinforced.

“In the case of student directors, they get the opportunity to articulate the lessons they’ve been taught to the actors,” he added. “It is also a place where they get to see that the director doesn’t always come to the table with the answers; part of the rehearsal process is that not only do the actors get to try and fail, but we do too.”

Since being moved out of the larger Turner Auditorium because of construction in the Griffith Fine Arts Building, SFA’s theatre program has looked for plays that could be performed in smaller spaces, specifically within the confines of Kennedy Auditorium on campus. “Lord of the Flies” challenges those constraints, according to CaitLyne Martin, senior theatre major from Brownsboro and the play’s stage manager.

“It's a bigger show than most of what we have done the past couple of years, especially since being displaced out of Turner Auditorium,” Martin said. “To start, just the name recognition of ‘Lord of the Flies’ can separate it from other shows we have done. I think one of the most striking differences in size is just how much larger the design is for this show. We have traps, monkey bars, projections, blood, elaborate props, etc. I think it might be the most elaborate scenic design I've seen since we did ‘Titus Andronicus’ my freshman year.

“Additionally, we are traveling to KCACTF (competition) for the first time since SFA traveled with ‘Sweat’ in 2019, which adds another element of complexity,” she said. “Thinking about specifics for my job as the stage manager, this means more extensive collaboration between various groups/designers, which requires more meetings, emails and phone calls. Most of all, this show has required that as a management team, we are willing to roll with the changes, and keep pushing forward so that our show can stay on track.”

Some changes have been made in the theatre program’s rehearsal process in recent years, and adapting to those changes quickly has been key for Martin. “Last year, I was in Dallas on my BFA internship, and the department made significant changes in our processes. Adapting quickly to those changes, and learning along the way, has at times proved challenging for me personally,” she said. “However, it has also reinforced the idea that theatre is a collaborative space, and asking for guidance in this setting is incredibly easy.”

Addressing spatial restrictions involved with being displaced, Martin explained that the rooms in which students can rehearse are not big enough to fully tape out a correct to-scale version of the set. “Instead, we had to scale it down significantly,” she said. “This has made transferring the show onto the actual set more difficult, but it has also freed up the group to change as the show develops, and that’s an incredible skill to learn.”

As assistant director, Frisco junior Emma Dumas has found that time management has been a big challenge with the demands of this play. “Balancing work, school and the show has been really difficult for me, but it has been worth it,” she said. “I have been able to schedule time to work on things throughout my day so that the late nights at rehearsal do not take such a toll on me. This is my first time working on a management team for a MainStage show, so I have been adjusting to the time commitment.” Dumas sees her role as helping to work the scenes, adjust blocking and, basically, do whatever House, as director, needs her to do to keep things moving forward.

“The most rewarding part has been getting to learn from everybody,” Dumas said. “While I am learning a lot from Cleo House in being an assistant director, I am also learning so much from other people, too, including from the stage manager and the actors themselves. I am getting to soak in all of the experience and knowledge from all around me at rehearsals and throughout this process.”

Assistant stage manager Snyder O, Celina freshman, ensures that the backstage crew runs smoothly, and exactly that, in his view, is what is happening with “Lord of the Flies.”

“‘Lord of the Flies’ has run smoothly compared to other shows I have done in the past,” he said. “As a freshman, this has been a great experience to learn and grow as a stage management student. This is a big show because it requires many moving parts and technical aspects. The actors are almost always on stage. This involves a lot of physical movement and stage combat. But the show has a fantastic cast and production team. Learning from others and getting to know them has been so rewarding. I also have loved making new friends in the cast.”

House considers this presentation of “Lord of the Flies” a PG-13 play, “but anyone from 12 years old and up can find joy in the ‘adventure’ the play offers,” he added.