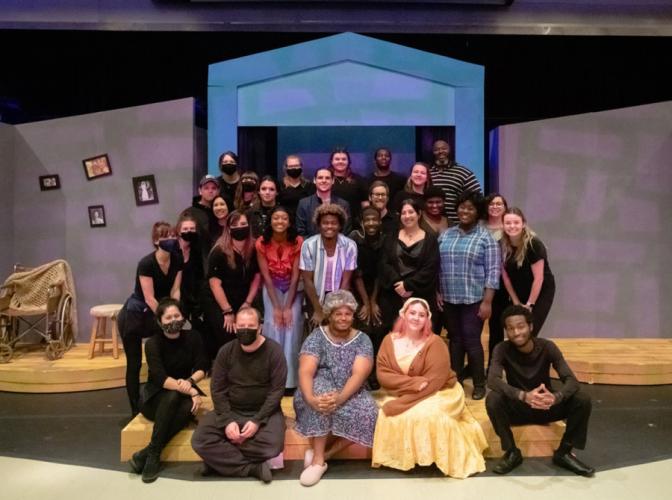 
NACOGDOCHES, Texas – The School of Theatre at Stephen F. Austin State University has learned that its production of Robert O’Hara’s play “Bootycandy” has earned a 2022 Artist Citizen Award from the National Committee of Kennedy Center American College Theatre Festival. KCACTF is a national organization affiliated with the Kennedy Center in Washington, D.C. The organization celebrates and encourages excellence in college and university theatre.

The Kennedy Center Citizen Artist Awards recognize programs in higher education using theatrical production to promote long-term societal impact through an artistic lens. The award is designed to “encourage empathetic exploration of the complex cultural and physical world, and to advocate for justice on campuses and throughout the world,” according to information at the KCACTF website.

SFA was one of only 22 schools in the nation to receive the award, according to Professor Cleo House Jr., director of the School of Theatre and director of last fall’s presentation of “Bootycandy.”

"This recognition is reaffirming,” House said. “I say reaffirming because the School of Theatre has already been affirmed by the reaction of our students and the audiences that came to see the show and by our colleagues in Region 6 of KCACTF. So, it is icing on the cake to be recognized in this way by the national committee of KCACTF.”

Participation in KCACTF gives SFA’s theatre program visibility and lets students who are looking for a place to train know that “we are a viable option for them when it comes to their theatre training,” House added.

“Even before my time as director, the School of Theatre had an awareness and commitment to diversity,” House said. “We are continuing on that journey to widen the scope of representation. Such a recognition on a national stage is the kind of attention we want to bolster our already great reputation as place where students want to come to study theatre and train for their future."

The School of Theatre presented “Bootycandy” for its first 2021-22 Mainstage production last October. The play is a satiric portrait of American life told through the lens of Sutter, a gay Black man on an outrageous odyssey through his childhood home, his church, dive bars, motel rooms and even nursing homes. O'Hara weaves together scenes, sermons, sketches and daring meta-theatrics to create an encompassing portrayal of growing up gay and Black.

“Bootycandy” student actors who earned Irene Ryan Acting Award nominations were Daun Whaley of Texarkana, Andre Hankerson of Beaumont and Jaz'Lyn Lewis of Longview.  Whaley competed at the regional festival and made it to the semi-final round.

"My takeaway from working on this production is to never be afraid to push the boundaries of my comfort zone when I'm creating art that I believe in,” Whaley said. “‘Bootycandy’ is a story that our entire team was passionate about telling, and it's a story that needed to be seen and heard.”

“‘Bootycandy’ is a great example of the School of Theatre’s commitment to diversity and inclusiveness, not only in production but also in curriculum,” House said. “We are committed to a well-rounded offering of plays for our Mainstage.”

With the upcoming fall semester, SFA’s dance program will become part of the Micky Elliott College of Fine Arts. The new SFA School of Theatre and Dance will present the following production season for the 2022-23 year: “The Moors” by Jen Silverman, Sept. 29 through Oct. 2; “Lord of the Flies” by Nigel Williams, Nov. 3 through 6; Danceworks (fall) Concert, Nov. 10 through 12; Repertory Dance Company Faculty Concert, Feb. 16 through 18; “Everybody” by Branden Jacobs-Jenkins, Feb. 23 through 26; Danceworks (spring) Concert, April 13 through 15; and “[title of show]” by Jeff Bowen and Hunter Bell, April 20 through 23.