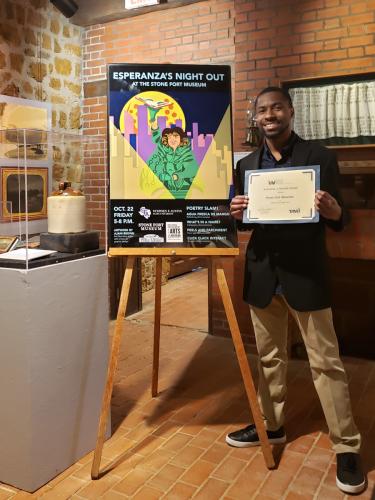 Ajani Brown holds the Mitchell A. Wilder Silver Publication Design Award while standing next to his poster that was used to market the event “Esperanza’s Night Out at the Stone Fort Museum” in October. The award, named in honor of early museum publication advocate and founding director of the Amon Carter Museum in Fort Worth, recognizes excellence in museum graphic design and publications across Texas.

“I take immense pride as a staff member in representing the museum at the state level,” Brown said. “I was absolutely ecstatic hearing my design could win the museum this award. It felt amazing to know that the work I put into graphic design and illustration classes at SFA has paid off. I also felt a huge sense of pride in my family knowing they were my greatest support.”

The award recognizes and promotes the highest standards of graphic design and media production in museum publications, including invitations, newsletters, brochures, books, catalogues and posters, among other marketing and supplementary materials. The award is named in honor of one of the early advocates in museum publications, Mitchell A. Wilder, founding director of the Amon Carter Museum in Fort Worth.

Brown drew inspiration from Sandra Cisneros’ novel, “A House on Mango Street,” which was the basis of the event. The heroine and narrator, Esperanza Cordero, is depicted in the poster in a pose similar to the Statue of Liberty, and is holding a book in place of a torch to illustrate how she used writing to empower those like her and needed a light to clear their path.

“Esperanza’s Night Out at the Stone Fort Museum” was held in collaboration with the Nacogdoches Public Library’s Big Read grant in October. The event included a variety of activities including a poetry slam featuring guest poet, Qui Quarre, of Nairobi, Kenya.