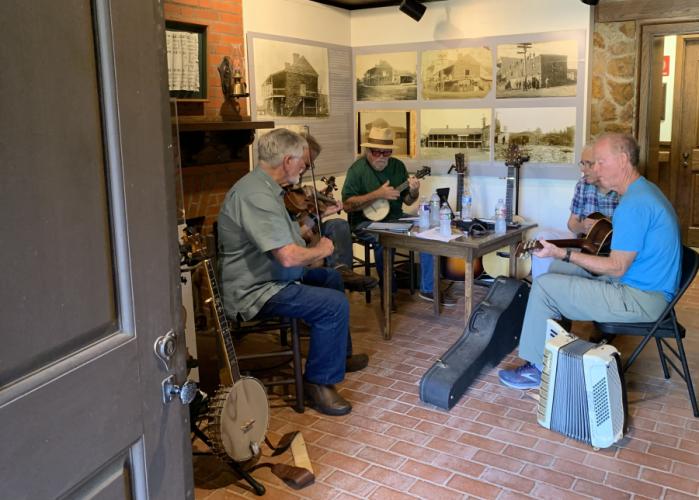 Stephen F. Austin State University’s Stone Fort Museum will host the inaugural Fall Jamboree to kick off the Nacogdoches Public Library’s Big Read program from 5 to 8 p.m. Sept. 30 at the museum on SFA’s campus. The event will include a performance from El Camino Real de Nacogdoches, pictured here during a jam session in the museum, as well as homemade food and a Hatch green chile cook-off.

The Big Read is a program of the National Endowment for the Arts in partnership with Arts Midwest and is designed to broaden an understanding of the world, communities and oneself through a collectively read book. The program’s goal is to inspire conversation and discovery among community members and revitalize the role of reading in American culture.

“The museum’s Fall Jamboree is an opportunity to share the native plants and traditional foodways of East Texas with the SFA and regional community as we enjoy traditional music,” said Carolyn Spears, Stone Fort Museum director. “The event connects the museum’s Spanish history with the Nacogdoches Public Library’s Big Read book.”

This year’s Big Read book, “Nothing to See Here” by Kevin Wilson, follows a pair of young women, Lillian and Madison, during the 1980s and 1990s. When Lillian is asked to spend a summer caring for Madison’s stepchildren, she quickly finds out the children catch on fire when they are upset. Lillian has to learn to care for the children while also keeping them safe despite the unusual circumstances.

The event will consist of music from El Camino Real de Nacogdoches, as well as Dutch oven cornbread and plum jelly made from the museum’s Spanish Colonial Demonstration Garden plums. There will also be a Hatch green chile cook-off competition that is open to everyone.

Students in SFA’s hospitality program will be on hand with treats from the Lumberjack Express, SFA’s mobile food lab.

“Students and faculty members in the SFA hospitality program will preserve the fall harvest of Mexican plums from the Spanish Colonial Demonstration Garden, a living laboratory of plants described by Spanish explorers as they traveled El Camino Real de los Tejas,” Spears said. “Along with Dutch oven cornbread, the Mexican plum jelly, chile peppers and live music, the Fall Jamboree will be an evening to savor.”

Rules for the cook-off are as follows:

Entry deadline for the cook-off is Sept. 28.

For more information or to volunteer for the event, contact stonefort@sfasu.edu. To enter the cook-off, visit gosfa.com/chilecookoff or call (936) 468-2408.