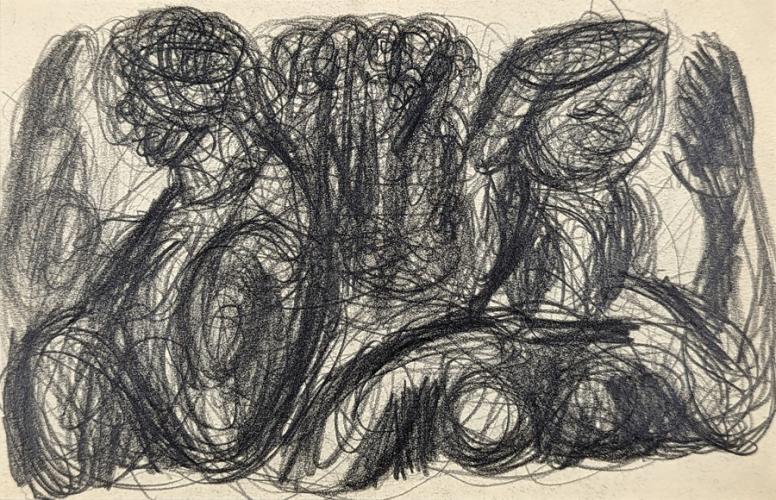 Jennings Tofel’s “Genesis 1,” circa 1930s, graphite on paper, is among the artist’s abstract and expressionistic drawings featured in “Jennings Tofel: Drawing Genesis,” an exhibition showing Nov. 22 through Jan. 20 in The Cole Art Center @ The Old Opera House.


NACOGDOCHES, Texas – Abstract and expressionistic drawings by American artist Jennings Tofel are featured in an exhibition showing Nov. 22 through Jan. 20 in The Cole Art Center @ The Old Opera House in downtown Nacogdoches.

Jennings (originally Jehudah) Tofel (1891-1959) was an accomplished poet and essayist as well as a visual artist, writes Lewis. He was active in a group of Jewish intellectuals known as Die Yunge (The Young Ones) led by the poet David Ignatoff, a champion of Yiddish language poetry. A long-time friend of Alfred Stieglitz, Tofel contributed an appreciation of his long-time friend to the popular anthology, “America and Alfred Stieglitz: A Collective Portrait,” originally published in 1934. Tofel was a well-respected avant-garde artist who regularly exhibited in solo and group exhibitions in New York and Chicago, as well as Paris, France, according to Lewis. From 1920s through the 1950s, Tofel’s solo exhibitions were reviewed in Art News, Art Digest and other magazines, as well as in the major New York newspapers. Since his death, two monographs, including a lavish Abrams book, have been published. His work is represented in the Whitney Museum of American Art, the Hirschhorn Museum, and the Smithsonian Museum of American Art, among other notable collections.

“While his expressionist paintings have been studied, very little attention has been given to Tofel’s drawings, and even though he was an important illustrator, even less about that,” Lewis writes. “The ‘Drawing Genesis’ exhibition is the first to focus attention entirely on the artist’s drawings. Many of these works are quite abstract. Essentially what the surrealists would call automatic drawings, subconsciously rendered (rather like doodles), they are nevertheless elegant and refined.

“The automatic drawings, dating from the mid to late 1930s, evoke mystery,” Lewis continues. “They often portray wraith-like or ghostly configurations, which suggest figures coming into being (or perhaps dissolving into un-being), emerging subconsciously from the very act of swirling graphite pencil or India ink on the paper.”

A few pen and ink and ink-wash drawings executed variously in a symbolist or expressionistic style are also included in the exhibition. “These were intended as equivalents to poetry, and some were published as illustrations in Yiddish books and literary magazines,” Lewis said. “These range in style from simple, understated contour-line figure drawings to intricate and densely rendered scenes, suggestive of biblical or mythical visions.”

While Tofel’s imagery usually conveys a sense of mystery or melancholy, in a few examples, the figures can be slightly “goofy” in appearance, and this element of comic relief reveals something about the artist’s temperament, according to Lewis.

“To get the fullest impact of the implied narrative relationship between the drawings,” he said, “one really does need to see them displayed in groups, where a visual tension and unspoken dialogues begin to emerge between them.”

A closing reception is planned for 5:30 to 7:30 p.m. Thursday, Jan. 19, at Cole Art Center. Admission to the exhibition and reception, which is sponsored in part by William Arscott and the Friends of the Visual Arts, is free. Gallery hours are from noon to 5 p.m. Tuesday through Saturday. For more information, call (936) 468-5500.