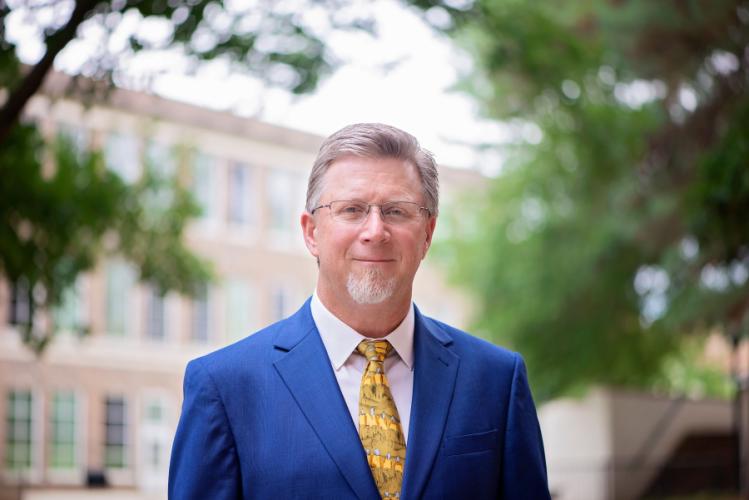 With a 30-year history at SFA, Wurtz has served as interim dean of the ECFA since July 1, 2021 to the present. Joining the faculty at SFA in 1992, he was professor of trumpet at SFA from ’92 to 2016 and director of the Swingin’ Axes jazz band during most of that time. He served as director of the SFA Summer Band Camps for 10 years.

Wurtz was director of the SFA School of Music for five years from 2016 to 2021, having served as interim director for six months prior to that appointment. He has also served as associate director, assistant director and coordinator of undergraduate students for the School of Music.

“To be named dean of the Micky Elliott College of Fine Arts is an honor that humbles me to my core,” Wurtz said. “I began teaching here as an adjunct trumpet instructor in 1992, and in the years since then I have taught hundreds of students, contributed to countless performances, worked alongside many inspiring colleagues, held every possible rank, and made more friends than anyone deserves. My wife and I decided many years ago that SFA was a good fit for us, and we chose to plant deep roots here in Nacogdoches. We have been active in the community, raised two children, and tried to make a positive impact wherever we could. I enter into this next chapter of my life knowing I have much to learn, but eager to get to work on behalf of the many fine students, faculty and staff members who study and work here.”

Wurtz is the recipient of SFA’s Teaching Excellence Award for the College of Fine Arts in 2011 and was named a “Gem of SFA” by the provost the same year. He was the college’s nominee for the Faculty Achievement Award in Teaching for the 2014-15 academic year.

He has served on numerous national, state and university committees and councils, including financial assistance and scholarship, budgeting, admission standards, policy, strategic planning and compliance committees, among others, at SFA. In the 2004-05 academic year, Wurtz served as chair of the Faculty Senate, and in 2020-21 as chair of the Chairs Forum. He currently serves on the Campus Master Planning Committee, Compliance Coordinating Committee and University Training Curriculum Task Force.

Wurtz becomes the first dean of the recently renamed college following a generous gift last fall from the Bill Elliott family of Nacogdoches in support of the university and to honor the late Micky Elliott’s love of fine arts.

“When you consider the combination of Bill Elliott’s life-changing gift to the college with the university’s commitment to the fine arts through the building of a new facility,” he said, “it is no stretch of the imagination to see that our best days are ahead us, and I am excited and grateful to get to serve in this role as we move forward.”

As an established scholar and performing artist in his field, Wurtz has performed with numerous orchestras and bands, including the National Symphony of the Dominican Republic, Orquesta Filarmonica de Universidad Nacional’de Mexico, Shreveport Symphony, Orchestra of the Pines, Longview Symphony Orchestra, Lewisville Lake Symphony, Lexington (Kentucky) Philharmonic, Richardson Symphony Orchestra, Dallas Opera, Dallas Ballet, Dallas Black Dance Theater and the Dallas Wind Symphony, and many more. He has performed with the Bluebonnet Brass quintet of Fort Worth, Reunion Brass of Dallas, Amarillo Brass Quintet and continues to perform with the Piney Woods Brass Quintet.

Prior to his university experience, Wurtz taught trumpet in several Texas public schools in The Colony, Lake Highlands, Lewisville, Denton, Pampa, Amarillo and Canyon, as well as in the Dominican Republic. Wurtz earned a Bachelor of Music Education from West Texas State University, and a Master of Music in Music Education and Doctor of Musical Arts, both from the University of North Texas and under the mentorship of Dr. Leonard Candelaria.

He and his wife, Mindy, have two children, Gage, who is 27, and Hannah, a senior at Central Heights High School.