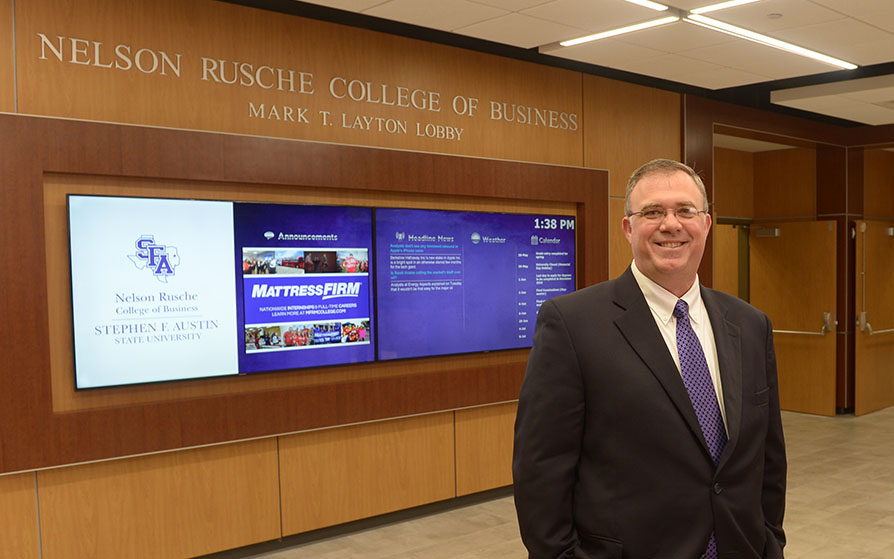 A college for future leaders

The SFA Rusche College of Business has provided business students with a personalized classroom experience since our business administration degree program kicked off in 1940.

A message from the dean, Dr. Timothy O. Bisping

In the Rusche College of Business, students engage in exceptional programs in fields with great career opportunities. We take both academic excellence and career preparation seriously. Here, students learn from outstanding faculty members and have the opportunity to apply what they have learned through various experiential-learning opportunities and corporate partnerships.

I welcome you to explore all the college has to offer. If you have questions about pursuing a degree in business, we in the Rusche College of Business are here to help.

In 2002, SFA renamed the College of Business to recognize the generosity of alumnus and friend, Nelson Rusche.

Rusche graduated from SFA in 1949 with a Bachelor of Business Administration. Just two years later, he put that degree to good use when he bought his first Gulf Oil service station. Soon he became a commissioned agent, fueling construction sites from the Houston ship channel throughout Harris County. His A.N. Rusche Distributing Company grew to a 250-million-gallon-a-year distributor.

He didn’t stop there — Rusche expanded his business, eventually owning 11 Mister Car Wash shops and several Handy Plus convenience stores throughout Houston. By 1991, he was providing detailed monthly reports on fuel purchases to clients through his company, Rusche Fuel Controls.

Rusche served on the SFA Board of Regents from 1986 to 1989 and was a lifetime member of the SFA Alumni Association. His endowment allows us to award scholarships to our best and brightest business students.

The Rusche College of Business has awarded nearly 20,000 degrees since 1940.

Designed to connect you with alumni who have pursued a career in your industry of interest, this network is a great place to find a mentor. Additionally, you can:

Want to Meet an Advisor in the Rusche College of Business?