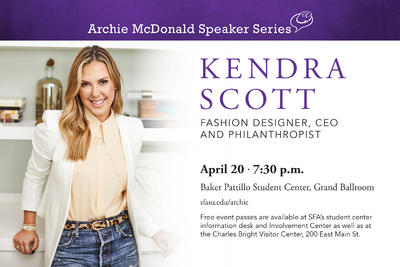 This event has been postponed but will be rescheduled.

About the Archie McDonald Speaker Series 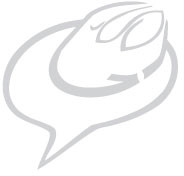 The Archie McDonald Speaker Series was created in 2010 by the SFA College of Liberal and Applied Arts led by Dr. Brian Murphy, dean of the college. The annual event is designed to honor and preserve the legacy of a distinguished scholar, educator and community commentator who brings American culture to the average person. In the tradition of McDonald's writings and oral presentations, the speaker series will host a prominent national figure annually at SFA to discuss contemporary cultural issues-from politics to art. In the process, the national profile of SFA will be enhanced, and the community will be enriched.

Dr. Archie P. McDonald taught history at Stephen F. Austin State University for 48 years and represented SFA president Dr. Baker Pattillo as university/community liaison. His popular weekly commentary was broadcast by the Red River Radio network, a National Public Radio affiliate. McDonald served as director of the East Texas Historical Association and editor of the association's journal for 37 years. He also served as president of the Texas State Historical Association and as vice chair of the Texas Historical Commission. He was the author/editor of more than 20 books on historical topics, as well as one book of humor titled "Helpful Cooking Hints for House Husbands of Uppity Women." McDonald's wife, Judy, served as president and CEO of the Nacogdoches Economic Development Corporation and was the first female mayor of Nacogdoches. She served on the city commission for a total of 18 years, and the city's public library is named in her honor. McDonald passed away Aug. 16, 2012.

The Archie McDonald Speaker Series was created in 2010 to honor McDonald's legacy as a distinguished scholar, educator and community commentator.

"It has been a valuable learning experience for SGA to participate in the Archie McDonald Speakers series. The result has been a student event that is closely tied to the central academic mission of the university and that exposes students to a variety of new ideas. It is also a tremendous highlight of the Week of Reflection, a time when students can pause and think about how what they are learning at SFA is changing them into the person they aspire to be." - Dr. Adam Peck, SFA dean of student affairs.

Want to attend the event?

A private reception for 100 guests will be held prior to the main event. Private reception tickets can be purchased by contacting Sarah Sargent, SFA development assistant, at 936.468.5406