Even with foam earplugs firmly in place, the rhythmic bang of Big Blue — a Blu Max 110 blacksmithing hammer — rattled eardrums at a 10-foot distance.

On a surprisingly cool morning for early September, Kevin Burgess, an SFA junior studying art metals, methodically paces back and forth between his home-built forge, Big Blue and a well-worn anvil that's been spray painted Lumberjack purple.

The doors to his Cushing workshop are wide open, letting in the morning light and a nice breeze — the latter a momentary respite in a space with instruments that can reach well over 2,000 degrees Fahrenheit.

Steel is Burgess' metal of choice. After waiting a few minutes for a piece in his homemade forge to heat up, he pinches it with blacksmith tongs and places it under Big Blue's powerful industrial hammer for about 10 seconds. This action removes a fair amount of the backbreaking work required to further shape the steel before he heads to the anvil for smaller, more precise wallops.

Bladesmithing requires a lot of patience. Five minutes softening steel in the forge often can mean only 10 to 15 hits at both the industrial hammer and his anvil before it's hardened again.

"The old saying is half of a blacksmith's life is spent waiting for the steel to heat up," he chortled. 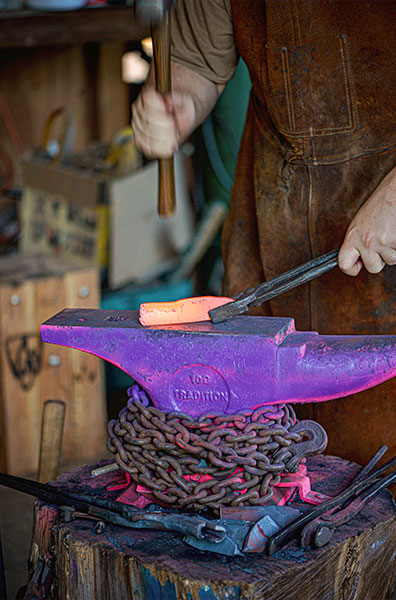 Burgess has been bladesmithing for roughly six years. "Realistically, more like four," he said, explaining, "You really start out not knowing anything," so naturally it takes a couple years to get good at the basics. That was certainly the case for him when at just 15 years old, he became a fairly avid watcher of YouTube bladesmithing videos.

"One YouTube channel, AWE Me, had a series called ‘Man at Arms' where they would take different swords from anime and video games and then make them in real life," Burgess said. "Probably the one that really set off my fascination was when they made Sokka's meteor sword from ‘Avatar.' It was a really beautiful, simple, elegant piece. I thought, ‘That's cool. I want to make a meteorite sword.'"

Curiosity quickly grew into devotion, and six years of hard work has already reaped impressive rewards, like being invited to compete against three other bladesmiths on the History Channel's show "Forged in Fire" — and winning.

"It was a little bit surreal for a while," he said. "I got into forging a year or two before ‘Forged in Fire' first kicked off, so on the nights it aired, it was that night's ritual to watch. Now when I watch the show, it's nice to know that I can do those things I'm telling them to do."

A few minutes into season 7, episode 19 of "Forged in Fire," after host Wil Willis welcomes viewers, the episode's four contestants make their way into the workshop from an off-screen room. Last in the lineup, Burgess stands unsmiling, anxiously waiting for his first of three blade challenges.

"I hope I get invited back just so I could smile a little bit more the second time," he laughs. "I realized watching myself that I am stone-faced the entire time." 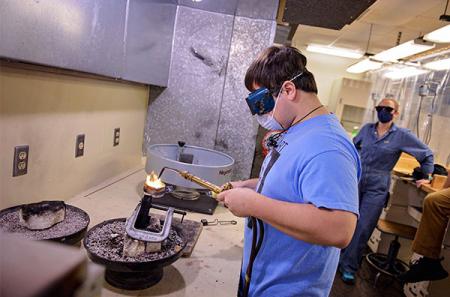 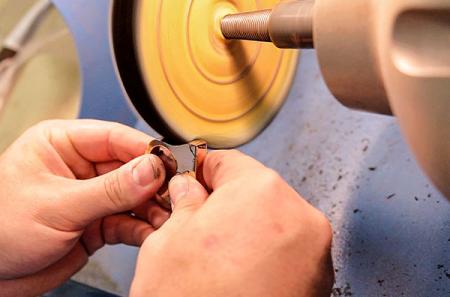 Stone-faced though he may be, the seriousness of his expression is a well-suited match for the precision of his work. During the first full challenge, the camera rarely bothers to head his way because, well — there just wasn't much drama unfolding.

"In the first round, I was just on autopilot, so the few times they did have the camera on me, they were like, ‘Hey, that kid's steel isn't moving at all. He's good at what he's doing,'" Burgess said.

Each "Forged in Fire" episode sees four bladesmiths compete in three elimination challenges for the chance to win a $10,000 prize. The final blade often is the most complicated, with contestants sent home to produce a full blade and handle during a four-day period.

Burgess' episode was filmed in August 2019 and aired in January 2020. After breezing through the first two challenges, he and one other contestant were tasked with forging a pira — the historical weapon of choice for the Yacan tribe of the South Philippines. Stipulations required the blade be 21 to 23 inches long with a 5-inch handle wrap or collar.

It was the first challenge to present intense issues for Burgess. He spent nearly a full day forging his signature Damascus blade only to have it split in half and have to start over.

After regrouping, Burgess finished and flew back to the studio for the pira's first of three slicing tests. Not only did his blade pass with flying colors, but the judges declined to test the other contestant's blade for fear of visibly faulty handle work. Burgess won.

"On the plane home, I was scrolling through Instagram on my phone when the man next to me turns and asks, ‘Do you make knives?' I said yes, and he asks if I've seen ‘Forged in Fire,'" Burgess laughed. "Out of everybody, I think I wanted to tell that man the most that not only was I on the show, but I won it! He actually ended up ordering a knife from me, so I was able to tell him a few months later." 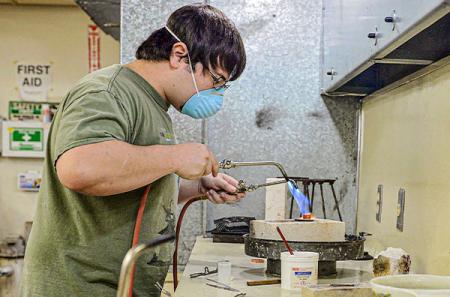 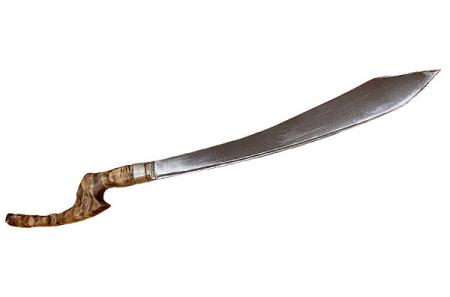 Celebrating with his (metals) family

Even though Burgess had to keep his win a secret until the episode aired, he had built a strong family of fellow SFA metalsmithing students who supported him throughout and after the competition.

"I am so grateful I was able to be one of his confidants during his ‘Forged in Fire' experience," said Lauren Selden, SFA professor of metalworking and jewelry in the School of Art. "I don't enjoy holding onto secrets and don't find that I'm good at it, but this was a big secret, and I was so proud of him."

Burgess began largely self-taught but has since learned under American Bladesmith Society-certified master bladesmith Scott McGhee, owner of Guinea Hog Forge in Clarkton, North Carolina. While Burgess' specialty is blades, he said there is so much to learn about the science behind working with metals.

"It's a bit of chemistry and material science, because not only am I a metal worker, I'm a wood worker," Burgess said. "I have to understand material strengths when I'm choosing epoxies and have to learn all the ins and outs of heat treating. When you start to get into high-grade steels, you have to learn about cryo-treatment, and then you start worrying about oxygen contamination. This is definitely a science-heavy field."

"We are working with science the entire time along with our senses," Selden said. "We know the melting temperature of our metals, but we learn to see a color that is a visual indicator of temperature. We learn to hear the sound of a manipulating or hollow blow of the hammer. We can hear the speed a tool is moving. This requires many parts of your brain to function together. If you know the possibilities and limitations of all of these processes and the metals, when an idea comes, you can produce a new thing for the world."

Burgess created his company, Burgess Forge, in 2016, which he operates out of the workshop on his family's Cushing property. He makes high-quality blades with hand-carved handles in various materials. After learning all "the finer points" of metalwork at SFA, it is Burgess' intention to make bladesmithing a lifelong career, so he can continue producing new things for the world.