Two-time alumnus excels in all endeavors

Saville Harris '10 & '13 understands the value of a good first impression — a person's and a university's.

New SFA students are typically introduced to the 6-foot-5 self-proclaimed "big fella" when he (literally) dances into the spotlight on the Grand Ballroom stage as the bass from a popular summer anthem reverberates off the walls, vibrating the seats and the wooden floor. Within minutes of his arrival at the start of every Thursday night Spirit Rally during Orientation, Harris has hundreds of incoming students stomping their feet, shouting SFA cheers and waving their hand-sign axes like seasoned Lumberjacks.

Joking with incoming students and getting them excited about their first year as Lumberjacks brings a lot of joy to Harris, whose day job is serving as SFA assistant director of student engagement-Greek life. But along with the crash course in SFA spirit and traditions he delivers as the rally's perennial emcee, there is a deeper, more important message he is hoping to impart to the crowd.

"I remember sitting out there in the audience as a freshman and thinking, where am I? What am I even doing here? Coming to SFA wasn't my original plan, and I was a little lost and overwhelmed with no clue what my future would look like," Harris recalls.

"In that way, I think my SFA story started off like a lot of people sitting out there. And I feel it's important for them to hear how someone just like them came to SFA and learned who he was and what he was really good at. I want them to leave that rally knowing they can do the same thing. They can take advantage of all the resources and relationships and opportunities SFA has to offer, and they can succeed at anything they want to do."

Harris was born and raised in the small East Texas lake city of Livingston, about 70 miles south of Nacogdoches. When he was about 5, he began "working" in the family business, a restaurant his parents have operated out of his great grandfather's old house for more than 35 years. He and his siblings spent a good chunk of their childhood helping run Florida's Kitchen, named for his mother, learning valuable life lessons along the way.

"You learn a lot about how to work with all kinds of people, and you get good at managing situations that don't go as planned," skills that have benefited him throughout his career in higher education, Harris said. "It also taught me the value of a dollar and created a mindset that I can do anything I want in life if I work hard at it. I could play sports, make good grades and have a lot of fun with my friends — but I still had to get up early to help take 80 briskets off the pit, wash the dishes and take out the trash."

A primary reason he chose SFA was its proximity to home, which allowed him to continue to help out at the restaurant on weekends. He also was determined to get the most he possibly could out of his college experience, and he quickly rose through the leadership ranks of numerous student organizations.

As an undergrad, Harris was active in the Student Foundation Association, Student Activities Association, Driving Jacks, Hall 16 Council, Alpha Phi Omega community service fraternity and SFA Spikes, a group of students who supported the SFA volleyball team. He also served as an Orientation leader and supervisor and as a Jack Camp counselor, sharing his love of SFA with incoming students.

He was a three-time recipient of the Presidential Volunteer Service Award, was named SAA Member of the Year, Orientation Leader of the Year and Junior Homecoming Duke, and received the 1923 Society Award, recognizing students for excellence in communication, decision making, influence and teamwork. In 2012, while pursuing his master's degree, Harris was named Mr. SFA in recognition of his leadership in academic and cocurricular activities and service to the university and community. 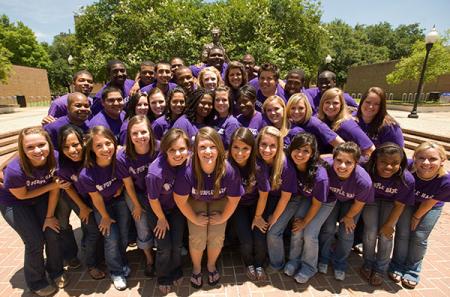 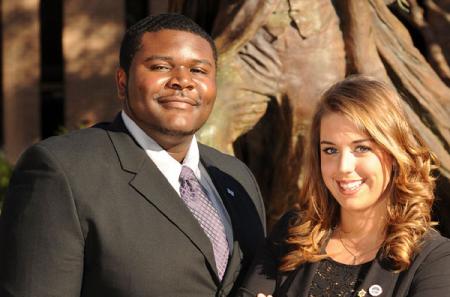 "SFA did so much to help me find myself, and I really loved giving back to the students and to campus," Harris said. "I got the opportunity to be a graduate assistant in Student Activities and eventually was hired full time as coordinator of student engagement. I had just met my future wife, and it was an amazing opportunity to stay in Nacogdoches and continue to serve SFA and help students every day."

Early in his career, Harris found helping students plan events and encouraging them to get out of their comfort zone and assume positions of leadership extremely rewarding. He soon became involved in the National Association for Campus Activities, which Harris said further convinced him he had chosen the right field and, along with his professional mentors at SFA, helped him develop as a higher education professional. He is currently serving a three-year term on the NACA Board of Directors.

In 2015, Harris' SFA role changed again when he was promoted to his current position as assistant director of student engagement-Greek life. He remembers naively thinking at the time, "This will be easy! All I have to do is support all these students who have already adopted a creed of service and high standards." It turned out to be a little harder than he thought.

"It took me a good two months to really establish some solid relationships with the leaders of all the different Greek organizations and convince them that we'd be better together and that I was looking out for their best interest and not just there to tell them ‘no,'" he said. "I have an open-door policy, and I am here to be an advocate for them and the impact they can have on our campus and also in the community."

Each semester, Harris holds one-on-one meetings with the chapter presidents, hosts risk-management trainings for officers and encourages students involved in Greek life to set high standards for themselves and fellow members, gaining valuable leadership and service experience along the way.

"At the end of the day, most students just want someone they can talk to who will listen to them, and that is a huge part of my job. They know now because I have told them a thousand times, ‘I will never say no if you have your ducks in a row.'"

Harris also teaches in the James I. Perkins College of Education as an adjunct professor of kinesiology, regularly presents at professional conferences and is serving on the search committee for SFA's next vice president for university affairs. Recently, he was honored with two of SFA's most prestigious recognitions, the 2020 President's Award and the 2020 SFA Alumni Lumberjack Pride Award. For the past few years, he also has taken on one of the most visible roles at the university this time of year: Purple Santa. Each year, he dons the purple Santa suit and visits dozens of campus offices to collect gifts for the Toys for Tots charity.

Turning Up the Heat

Now a husband and father to two young daughters, Harris recently began exploring his other passion, one that predates his life as a Lumberjack — sharing his love and talent for cooking with others. After cooking for friends and family for years and developing his own signature recipes, he has taken a leap of faith and purchased his own food truck. Big Fella's BBQ is now a regular fixture on the local mobile culinary scene, and his trademark Come Back Ribs, Jalapeno Mac and Cheese, and Cowboy Meatballs are in high demand.

"I learned to cook from watching my parents," he said. "My mama won't tell you how to make something; you just have to watch if you want to know, and I watched her a lot. My dad taught me about barbecue and seasoning the meat. I can still hear him telling me how to season a slab of ribs and the importance of getting seasoning all over the meat."

In fact, he added, it would not be wrong to say he learned most of what he needed to know to be successful in life while working with his family at Florida's Kitchen. The rest, he said, he learned at SFA.