Shooting for the Moon

On some days, it's hard for Sarah Volkman '15 to decide which part of her job she likes best.

Volkman, who received her bachelor's degree in cinematography from SFA, works for Analytical Mechanics Associates as part of the Johnson Space Center multimedia team, which contracts with NASA.

As one of four NASA-TV and video producers, she works alongside the Public Affairs Office at Johnson Space Center to support NASA Television and its multimedia needs.

Volkman produces "in-flight events" that connect media clients from around the world with astronauts living on board the International Space Station. She produces and directs briefings, news conferences, astronaut/scientist interviews, special-event broadcasts hosted by the Johnson Space Center, and coverage of live events at the International Space Station, including spacewalks and cargo deliveries.

She also travels to Russia to produce and direct live broadcasts for launches of astronauts from Kazakhstan to the space station.

"I always find it a little tricky to adequately explain all the different elements that fall under my job," Volkman said. 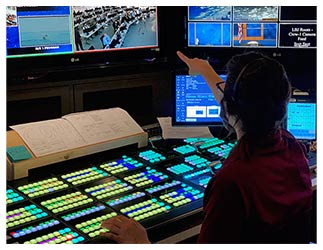 "I feel really lucky because my job includes so many different aspects, but it also allows me to serve as a video producer, which was always my first passion," she said. "I have several video assignments going at any given time, usually pertaining to whatever big events are gearing up."

Once in a while, Volkman said she also gets to fill in as on-screen host for some of the regular TV and video series, sometimes broadcasting live from Mission Control Houston.

"That is always a ton of nerve-wracking fun and another surreal thing I would never have guessed I'd get to do," she said.

Volkman was part of the video crew that earned an Emmy Award for Outstanding Interactive Program in 2019 for work on "NASA and SpaceX: The Interactive Demo-1 Launch."

The win came from the coordinated effort between NASA and SpaceX, the private company founded by Tesla CEO Elon Musk, which brought the historic Demonstration Mission 1 to an audience of millions by combining NASA Television programming with online simulcasts, social media and in-person events.

"Our team takes part in the live coverage of all major mission operations, and one of those was the NASA SpaceX Demo-1 mission in March 2019," Volkman said. "Demonstration Mission 1 was an unmanned test flight and the first of two test flights for the SpaceX Crew Dragon. It was extra significant because this was the first human-rated spacecraft to launch from America since the last space shuttle launch in 2011."

The multimedia team worked with the SpaceX media team and other NASA teams on the launch and docking coverage of that journey to the International Space Station. The project included several hours of live broadcasting, incorporating anchors in a few different locations across the country and inserting extensive video and graphic elements.

"We were so excited to learn the coverage had been nominated for and ended up winning the Emmy," she said. "I was one small part of the big teams that worked on this coverage, so it was very cool to be included in the honor, but I was extra excited for my colleagues who spearheaded the broadcasts. It involved months of complex problem-solving. It also included devising many new video routing and technical elements to effectively cover this special mission and to have the whole world be able to tune in and take part."

Volkman said her time at SFA helped prepare her for this exciting career, and she reflects on her SFA experience "all the time — it was really special for me," she said.

"My classes, even the ones that didn't directly serve my major, always had me encountering new ideas, inspiration and challenges, which really broke me out of my comfort zone," Volkman said. "My time in Nacogdoches taught me that a strong college experience could lead you down paths you may never have known existed but that could be so great for you. You don't necessarily have to stick to what you studied, because you come away with so many new skills you could apply in different ways.

"In the film program, Professor (Bill) Arscott taught us a lot of technical things but also that a good attitude and dedication could help you go far in whatever direction you chose," she added. "This helped me during the difficult post-college period, navigating the job market and eventually getting my first job at a news station in Tyler, which was a totally different approach to media and storytelling than I was used to. At SFA, I got to be a part of making two feature films, in addition to dozens of short films, which gave me a ton of close-to-real-world video-making experience that I continue to fall back on all the time in my work."

With all the "wild" projects she has been a part of, Volkman's most memorable event was the Apollo 11 50th anniversary NASA hosted in July 2019. The two-hour live broadcast was supervised by NASA headquarters but involved many NASA centers, and Volkman was in charge of the Johnson Space Center activities. 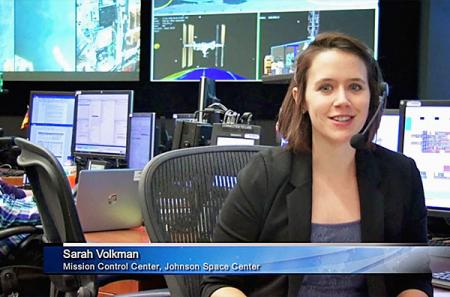 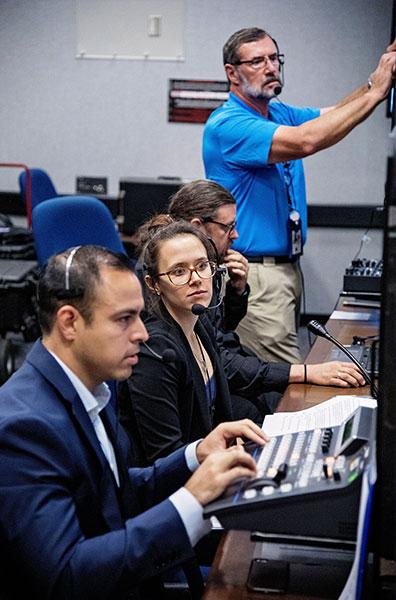 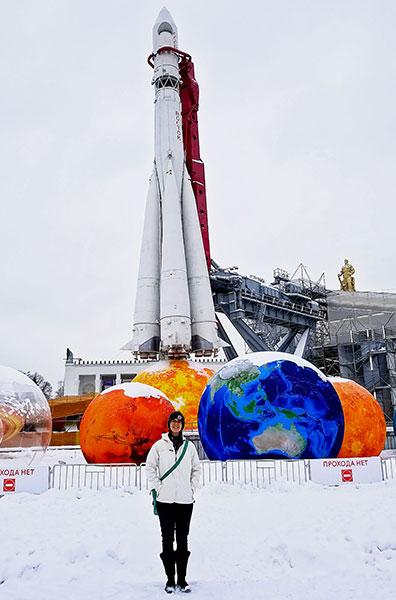 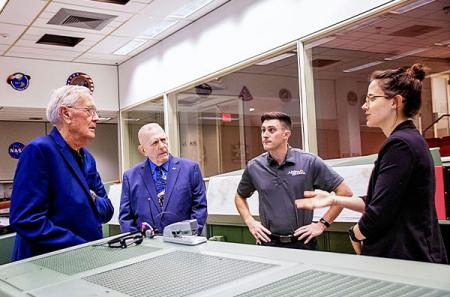 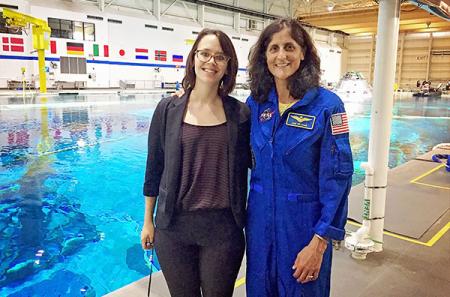 "This put me in the historic Apollo Mission Control Room, directing Apollo 11 and Apollo 13 Flight Director Gene Kranz, Apollo astronaut Charlie Duke, who had walked on the moon during Apollo 16, and current astronaut Jessica Meir."

Most recently, Volkman produced and edited several videos that were featured across NASA's social media accounts leading up to the NASA SpaceX Demo-2 launch on May 30.

Volkman, along with her team, also won the NASA Silver Achievement Medal for coordinating an interview between U.S. Vice President Mike Pence and the International Space Station.

"We've also received recognition for a very popular astronaut-themed set of GIFs and Instagram stickers we made," she said, "which is just a really amusing thing to think about."

Volkman said she is thankful to work with supportive colleagues on both the multimedia side of her job and within the Public Affairs Office.

"I think that partially comes from the culture fostered by Johnson Space Center, but also because of the type of creativity and passion that is ignited by being around and in the space industry," she said. "They make the job a lot of fun and are immensely helpful in the more challenging times. Live television is already a very unpredictable beast. Throw in space operations, and you can count on some pretty high-pressure, high-stress situations that make you super grateful for a great team."

Volkman said she is looking forward to covering the next moon landing in a few years. "That's something I can't imagine not working on," she said. Additional long-term plans include being open to whatever new opportunity she may stumble upon ­— or stumbles upon her.

Wherever she may land, Volkman said she is grateful her job perfectly pairs with what she's passionate about — filmmaking — with an opportunity to impact the world in a positive way.

"That has always been a big goal of mine," she said. "The fact this takes place within NASA, and I get to be inspired by some of the world's most intelligent and courageous people every day, is a gigantic cherry on top of the cake."