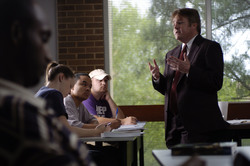 Dr. Michael Tkacik, the new director of the School of Honors at Stephen F. Austin State University, speaks to students during a class. Tkacik will continue to teach while serving in his new role as director.

"This is truly a crown jewel," he said of his new position as director of the SFA School of Honors. "Not only do I still get to teach and work closely with students, but I get to work with some of our best and brightest students. It's almost not fair."

Tkacik assumed his new duties at the School of Honors at the beginning of the fall semester, replacing longtime director Dr. Allen Richman who recently retired. He first joined the faculty of SFA's College of Liberal and Applied Arts in 1999 and will continue to teach classes while serving in his new role as director.

Once he has had time to learn all he can about the School of Honors' existing programs, Tkacik says he hopes to increase the number of participating students and expand the school to better serve them.

"Dr. Richman has done an amazing job here, and he left behind some shoes that are just too big for me to fill," Tkacik said. "But I do hope to find some ways that we can continue to build on the programs he started and make them even better."

His ideas include enhancing the sense of community among honors students by revitalizing the SFA's Honor Student Association; expanding honors course offerings, especially to include more high-level classes; increasing scholarship opportunities; and developing a study-abroad opportunity specifically for honors students.

In addition, Tkacik said he will work to bring more of SFA's existing students into the honors program, which now focuses its recruiting efforts primarily on incoming freshmen.

"I, myself, was one of those students who didn't do all that well in high school, but once I got to college, I really blossomed," he said. "I would like to see us make more of an outreach to those students who are really excelling now that they are here, even though they may not have had the best SAT or ACT scores coming in."

Dr. Richard Berry, provost and vice president for academic affairs, called Tkacik "the ideal person to head the honors program - a great role model and leader for our students."

"Dr. Tkacik is an excellent teacher and an accomplished scholar with an impressive research and publication record," Dr. Berry said. "In addition, he is always deeply engaged with students. I am delighted he agreed to accept the director's position."

Throughout his teaching career, Tkacik has offered classes in American foreign policy; international terrorism; international law and organization; war, politics and strategy; and American government. He is a past recipient of a Teaching Excellence Award and a former Fulbright Scholar.

Dr. Richman said that, in contemplating his retirement, he hoped his replacement would be someone who made the success of SFA's honor students his highest priority.

"The job requires someone with the ability to identify with the students and their highest, most important ambitions - someone who can interact with them in a way that they know, without a doubt, he is on their side and their concerns are his concerns," Richman said. "I believe SFA found that person in Michael Tkacik."