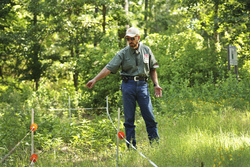 Dr. James Kroll directs SFA's Institute for White-tailed Deer Management and Research in the Arthur Temple College of Forestry and Agriculture and is a renowned expert on America's favorite big-game animal.

On a recent walk through a lush East Texas forest, Dr. James Kroll cautiously approached a white-tailed deer food plot surrounded by an electric fence. Glancing over to his companions, he warned, "Steer clear of the wires. That's 8,000 volts. It'll dry your socks out."

The fence protects a pea patch where Kroll is conducting research on rotation grazing for white-tailed deer. For more than 35 years, "Dr. Deer" has been highly involved in the research of white-tailed deer all over North America through SFA's Institute for White-tailed Deer Management and Research in the Arthur Temple College of Forestry and Agriculture.

As director of the institute, Kroll travels the country sharing his vast knowledge of America's favorite big-game animal with wildlife researchers and other outdoorsmen.

"When I was 7, I knew I wanted to be a wildlife biologist," he said. "Growing up, I remember watching Mutual of Omaha's Wild Kingdom. The show's host, Marlin Perkins, was a hero of mine."

As Kroll got older, he said, he began to understand the important role media, especially television, plays in shaping people's perceptions. He now has two of his own television shows, North American Whitetail in its 11th season and Dr. Deer in its second season. Both programs air on the Sportsman Channel.

Born and raised in Waco, Kroll first came to Nacogdoches in 1967 to deliver a speech and was impressed with the city and its history. Dr. Laurence Walker, who was dean of the SFA School of Forestry at the time, offered him a job starting a wildlife program in 1973, and, Kroll said, "I jumped at it."

Along with director of the white-tailed deer institute, his current titles at SFA include professor of forestry, 1995 Alumni Distinguished Professor, 1995-96 Regents Professor, Henry M. Rockwell chair and director of the SFA Forest Resources Institute. His expertise in wildlife, especially white-tailed deer, has benefited literally thousands of SFA students through the years.

"The majority of the time, our classroom is out here," Kroll said, indicating the surrounding East Texas Piney Woods. "The only way to get the experience you need in this field is having your boots on the ground. When our students graduate, they are highly prized and shovel ready. They can get out there and go to work."

Some of the projects Kroll and his students are working on include testing small-scale farm equipment and conducting research on deer breeding and genetics. "Deer hunting has become a huge industry," Kroll said. "In Texas, it totals $3 billion annually. In the United States, 85 percent of hunting is directed toward deer."

Kroll and his students designed and built one of the first deer-handling facilities in the world on 210 acres he owns near Cushing. The facility comprises a network of chutes, ramps and holding areas where deer can be temporarily detained and assessed, administered medications, or artificially bred.

Kroll said the deer remain relatively calm, and those that have been through the process multiple times are somewhat trained on what to do. "The ones you have to watch out for are the younger bucks. They can be unpredictable. The big megabucks usually don't give us any problems."

With decades of extraordinary experience under his belt, Kroll has become known to many as "the father of modern deer management." However, he is quick to credit others with much of his success. He enjoys working alongside his SFA colleagues on research projects, and he said the late Arthur Temple Jr. also played a significant role in his career.

"When I moved to East Texas, I began working at Boggy Slough, the Temple family's hunting and fishing club. Mr. Temple wanted Boggy Slough to represent the best example of deer management in the country. After conducting research, I told Mr. Temple that in order to do that, we were going to have to harvest a lot of does. The buck-to-doe ratio was 1:8, and the range was severely over-browsed, altering the forest.

"He placed his trust in me, and eight years later, ironically, I harvested one of the biggest deer ever taken in our state. He was known as the Boggy Slough Monster and sported 9-inch bases and four drop tines," Kroll said.

Between teaching, conducting research and taping television programs, Kroll said he has had little time lately for his other, lesser-known passion - painting.

"Very few people know I'm an artist," Kroll said. "I haven't painted in years, but I'd like to pick up the brush again. Of course, wildlife is my main subject. I've painted birds, ocelots and also wildflowers, but can you believe I've never painted a white-tailed deer?"