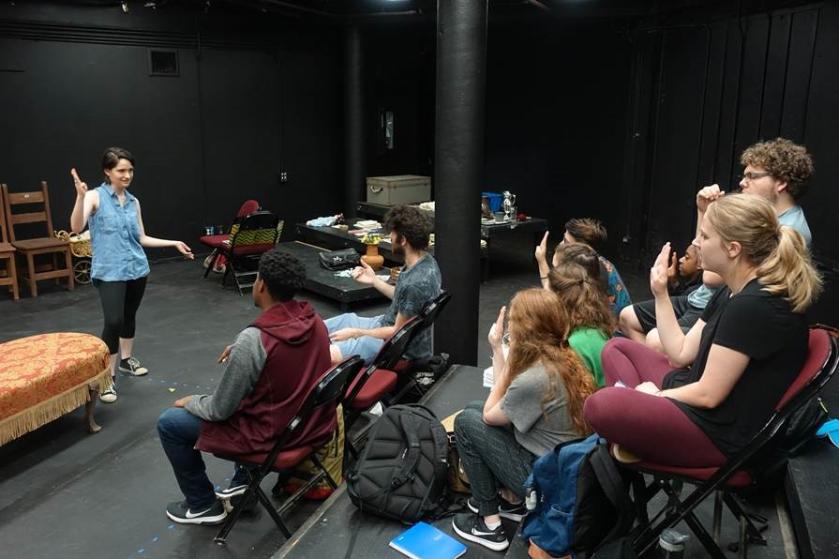 ‘The Miracle Worker’ calls attention to relationship that ‘changed the world’

Taylor Solice, Mesquite junior and dramaturg for the SFA SummerStage production of “The Miracle Worker,” helps theatre students learn sign language for their presentation of William Gibson’s play based on Helen Keller's autobiography, “The Story of My Life.”


NACOGDOCHES, Texas – Most people are familiar with the story of blind and deaf Helen Keller and her teacher, Anne Sullivan.

William Gibson’s play “The Miracle Worker” provides an intimate look at the student and instructor before they became historical figures and advocates for people with disabilities. It also reminds audiences of the miraculous achievements Keller and Sullivan made in changing the world of the disabled at a time when little had been discovered in the field of deaf-blind education.

“The Miracle Worker” is featured in this year’s SummerStage Festival at Stephen F. Austin State University. The festival, presented by the School of Theatre, is slated for June 27 through July 15 with performances in W.M. Turner Auditorium and the Downstage Theatre.

The play offers a historical glimpse into the lives of Keller and Sullivan, showing “the obstacles each had to overcome and the strength and resilience that carried them forward,” according to Dr. Inga Meier, assistant professor of theatre at SFA and the play’s director, who said her fascination with these women as significant advocates for people with disabilities led her to select this play for SummerStage.

“In terms of socio-economic background, life experiences and personalities, the women could not have been more different, and yet, together, they literally changed the world,” Meier said.

Gibson’s three-act play is based on Keller's autobiography, “The Story of My Life.” Keller, a young deaf and blind girl trapped in a world of darkness and silence, meets Annie Sullivan, an unorthodox and brilliant teacher. Despite the numerous challenges both face, Annie ultimately becomes the miracle worker who helps Helen unlock a world of possibilities.

“Today, we think of Helen Keller as an influential advocate for those with disabilities,” Meier said. “However, that she would transform from a child locked in a world of darkness and silence to one who would not only learn to communicate her way out of those restrictions, but also to advocate on behalf of others, was hardly a foregone conclusion. The play lets us see the depth and the power of that transformation.”

As program director of the Visual Impairment/Orientation & Mobility program at SFA, Michael Munro sees the work of Keller and Sullivan in action daily. He described Keller as “a rock star” in his field.

“The story is one of achievement,” Munro wrote in an email interview. “The world would be a lesser place if Ms. Sullivan had not facilitated opening the rich mind of Helen Keller for the world to witness and learn from in so many ways. Helen Keller has always been a demonstration of just how much persons who were blind could achieve with the proper support and education. The ‘miracle’ of Anne Sullivan was one of finding a way to reach Helen, and allowing her the opportunities and experiences from which she grew and learned – and changed our world.

“So much was accomplished by the breakthrough of one teacher to one student,” he continued. “A lesson there is that all students can learn and achieve. There were lots of chances for the Kellers and Sullivan to give up. But perseverance, care and respect for the mind of one child led to great achievements over the next 81 years of Helen’s life, including 12 books, countless lectures, articles and always a voice of advocacy.”

Meier sees the greatest challenge in directing “The Miracle Worker” as “doing justice to the reality of the experiences of a young girl who is deaf and blind in the 1880s, when many of the resources that now exist in the worlds of deaf and blind culture had yet to be developed.”

“As a director who is neither deaf nor blind, doing justice to these experiences is certainly a challenge,” she said.

The student actors are “enthusiastically” learning more about deaf and blind culture, which is a world that is foreign for many of them, Meier said.

“Theatre is unique in that its bread and butter is empathy,” she said, “but the humility with which the students are approaching the material is inspiring to watch.”

Both venues are in Griffith Fine Arts Building on the SFA campus.