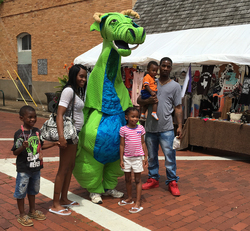 A family poses with the SFA School of Theatre's trademark dragon character Schlaftnicht at the Texas Blueberry Festival in downtown Nacogdoches. A variety of costumed fairy tale characters will be at this year's festival on June 10.

NACOGDOCHES, Texas - Those attending this year's Texas Blueberry Festival June 10 in Nacogdoches will once again see familiar costumed characters walking the downtown brick streets and have the opportunity to view a film depicting life in Texas' oldest town in 1938.

Students in the Stephen F. Austin State University School of Theatre will be promoting the upcoming SFA SummerStage Festival, while the SFA School of Art will host three screenings of "Found Footage: Rediscovering Nacogdoches" and the George Hooker short promotional film "Nacogdoches: The Oldest Town" at 10 a.m., noon and 2 p.m. inside The Cole Art Center @ The Old Opera House.

"Found Footage" features scenes of Nacogdoches people and businesses in 1938 documented on film. The Stephen F. Austin State University College of Fine Arts and Humanities Texas, in association with the Charles and Lois Marie Bright Foundation, championed the effort to restore the forgotten 16mm film, labeled "Nacogdoches 1938." Discovered at Nacogdoches High School in 1967 but forgotten until a few years ago, the film was digitally restored and viewed in 2014 for the first time in 70 years.

Also throughout the day Saturday outside Cole Art Center, theatre students will appear in costumes portraying popular characters from fairy tales and children's stories. Children (and adults) will have the opportunity to talk with the students and take photos with them, according to Angela Bacarisse, professor of design and arts management at SFA. The School of Theatre's trademark dragon character, Schlaftnicht, from the children's show "Trudi and the Minstrel," performed the summer of 2005, will make his annual Blueberry Festival appearance. A costumed dinosaur will make its debut at the festival this year.

Theatre students will also promote this year's SummerStage Festival, which kicks off Tuesday, June 27, and runs through July 15. The family friendly festival will feature the children's favorite "Ivy + Bean the Musical," with book, music and lyrics by Scott Elmegreen and based on books by Annie Barrows as illustrated by Sophie Blackall, and the America classic "The Miracle Worker," a three-act play by William Gibson based on Helen Keller's autobiography, "The Story of My Life."

Theatre students will also sell crafts and do face painting as a fundraiser for their study abroad trip to the Edinburgh Festival Fringe in Scotland in August to produce a student-written play.

The Cole Art Center traditionally serves as an official "oasis" during the festival, according to Lisa Steed, events coordinator for SFA galleries, with tables and chairs set up inside where festival patrons can escape the heat. The art center's restrooms will also be available to festival-goers.

Volunteers with the Friends of the Visual Arts will man an outside tent where they will sell homemade gumbo, blueberry tea and blueberry baked goods with proceeds going toward funding grants and scholarships the FVA awards annually to students in the School of Art. The FVA will also sell newly available notecards that feature photos of Nacogdoches landmarks as photographed by Christopher Talbot, Bill Nieberding, Ryan Russell, Stanley Bohon and other local photographers.