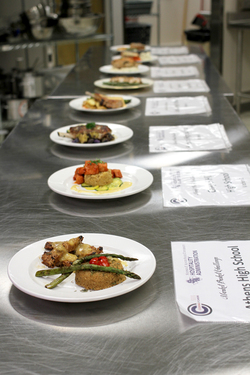 This year, students competed in a Market Basket Challenge where they were tasked with preparing two plates comprising a protein, starch and vegetable. High school students arrived at SFA without knowing the main ingredient they were required to cook with in the competition.

Teams of five students prepared a bone-in French pork roast. Several of the teams cut the meat into pork chops while others cubed the roast or cut it into strips.

One of the required two plates was judged on presentation and the other on taste. Both plates had to demonstrate consistency, correct portion sizes and creativity with ingredients, according to Todd Barrios, chef instructor at SFA.

"The Market Basket Challenge is a great opportunity for the visiting students to test their culinary knowledge and skills in a fun environment while also using our state-of-the-art kitchen. The event provided a day of sportsmanship and competition," Barrios said.

"Each year this event gets more focused and better," said Dr. Chay Runnels, event organizer and hospitality administration program coordinator. "We are pleased to partner with the Center for Teaching and Learning along with the East Texas Restaurant Association to bring top high school talent to SFA."

Cooking Up Careers also introduced students to SFA's hospitality administration program and culinary arts focus. SFA is the only four-year institution in Texas with this type of culinary program.

"I think the event was very successful. We were able to host eight high schools with hospitality or culinary arts programs on SFA's campus to see our facilities, meet our faculty members and work in our lab space," Barrios said. "We hope to see some of these students in our hospitality program at SFA soon."