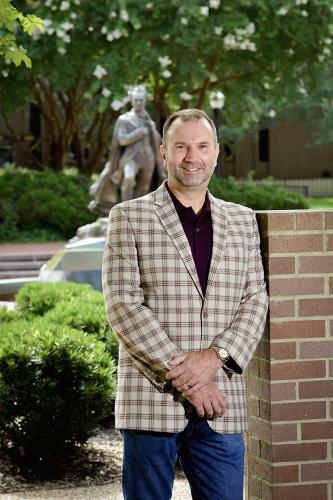 
When Fred Poston was a senior at Klein Forest High School in the Houston area, attending Stephen F. Austin State University was a good business decision.

“I had interest in attending a private university, but when I compared the costs, SFA just made sense,” he said.

Poston’s early business acumen paid off – he earned a Bachelor of Business Administration in 1992 and soon departed the state to begin his career in the entertainment industry.

“It wasn’t a career I had been considering,” he said. “In the early ’90s, most of the people I went to school with were getting job offers and lining up jobs before they graduated. Then a recession hit in 1992, and there wasn’t a job waiting for me. So, I asked myself what I might enjoy doing and decided to just give it a shot.”

Poston worked at a coffee factory for a few weeks to make enough money to pay for his transportation to California, and then landed a job in the Dick Clark Productions mail room making $40 a day.

“It didn’t pay all the bills, but it motivated me to work hard and make sure I could support myself,” he recalled.

“The company was doing a lot of award shows at that time,” he said. “It was a great way to learn the aspects of production for live television – you only got one chance to get it right, because everybody was watching.”

“I would see network executives kind of come and go, and I had to figure out what those folks were doing,” he recalled.

Poston got his wish in 1995 when he was hired to be a part of the launch of Warner Brothers’ The WB Television Network.

“It was great ground for learning everything it takes to build a television network, and it gave me the skill set to carry forward to the next network launch, which at the time was Fox Family,” he explained.

“Starting a television network – or a business – is very different than working with an organization that’s already established. You have to build everything from the ground up,” he said. “An advantage for me was coming out of the College of Business at SFA. Even though it was media work, I was a good partner to the people who were creating the product, that product being the creative business of telling stories. My priority was keeping an eye on what it takes to do story-telling as a business, and ultimately getting that product to the viewers.”

“That led to living in Miami for multiple years and working in Argentina, Brazil and Mexico, setting up local operations,” Poston said. “I would travel on a regular basis, meeting and hiring people to manage the regional production and operations. Managing people in other countries is an entirely different ballgame, due to the differences in languages and cultures. It definitely tested my skill sets.”

Poston again rose to the occasion when asked to oversee global operations for Discovery’s Asia-Pacific networks based in Singapore, managing operations for more than 80 channels and developing strategy for multi-purposing media.

“I was very fortunate – I was at the right place at the right time, from that first mailroom job to my first network launch,” he said. “And there was a time when my skills were used to provide change management leadership to reorganize or, in some cases, close networks. As interesting opportunities came along, I got involved, and that would lead to the next job. It was a privilege to be given these responsibilities.”

Always motivated and driven, Poston set and met the personal milestones he set for himself: a member of the Academy of Television Arts and Sciences, vice president by 30, senior vice president by 40. Now vice president for operations services for the CBS division of the ViacomCBS Corporation, Poston has played a role in the network origination of more than 100 channels in more than 40 countries and in 20 languages. Prior to the COVID-19 pandemic, he commuted to work each week in Los Angeles from his home in San Marcos.

“It’s been an incredible journey,” he said. “I’ve thoroughly enjoyed the things I’ve been involved with and the many talented people and projects I have had the fortune to be a part of, while always making it a priority to make a difference and give back in everything I do.”

This desire to make a difference led Poston to serve for 10 years on the board of directors for the Alliance for Housing and Healing, an organization that provides housing, food and healthcare for individuals in need in Los Angeles County, and he currently serves as a board member for the Friends of Fine Arts at Texas State University, as well as on a chapter advisory board for the local Theta Chi Fraternity chapter.

Poston said he was honored to be invited to provide the virtual commencement address for SFA in August and will deliver a positive message to the graduation candidates.

“My industry’s business has been about telling stories, and I am fortunate to have this opportunity to share my life story,” he said. “Things have changed for each graduate, but each one should realize and think to themselves, ‘I haven’t changed.’ They’ve completed their college degrees, and regardless of where they did that, they can decide how they will narrate and use that story to write their next chapters. We are definitely living in different, trying times – and we have an opportunity to choose how we will continue.”

The ceremony will be available via the SFA website beginning at 6 p.m. Aug. 14. More than 400 students are candidates for graduation, including five doctoral candidates, 114 master’s degree candidates and 325 bachelor’s candidates. For more information, visit sfasu.edu/commencement.