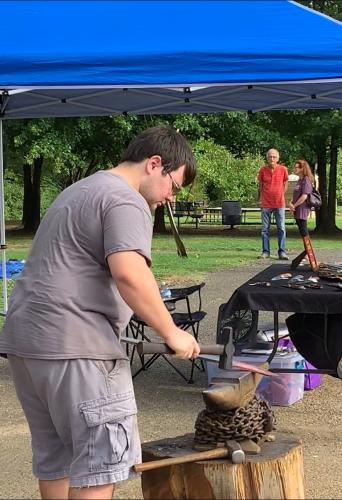 
NACOGDOCHES, Texas – Fans of the History Channel’s “Forged in Fire” learned Wednesday night what contestant Kevin Burgess has known for months: he won!

The Stephen F. Austin State University art student from Nacogdoches County competed last year in the “Forged in Fire” reality series, and the episode detailing his participation in the $10,000 competition was initially supposed to air on Nov. 20. But scheduling changes resulted in the episode being postponed until Jan. 29, and Burgess had to keep the results a secret all this time.

“It was an awesome experience working with three other very talented smiths, and I loved every second of it,” Burgess said. “The challenges were hard, to say the least, but I stand on the shoulders of giants that have figured out most of this stuff for me.”

Produced by Outpost Entertainment, “Forged in Fire” is a competition in which four bladesmiths compete in timed elimination rounds to forge bladed weapons for a chance to win a $10,000 prize and be named a “Forged in Fire” champion. In its seventh season, the competition, which is judged by experts in weapon history and use, tests some of the best in the industry as they attempt to recreate historic weapons.

He started his college career at SFA studying computer science but soon changed his major to art where he could follow his passion. Burgess is an art metals student studying with Lauren Selden, professor of metalworking and jewelry in the School of Art. Following graduation, he plans to earn a master’s degree with the hope of teaching bladesmithing at the college level.

Burgess offered the following advice for those who may be looking to learn something new, especially in the area of bladesmithing.

“Seek out those who are willing to teach, not the ones wanting to keep things a secret,” he suggested. “Because when people share what they have learned, it shows just how much they actually know.”