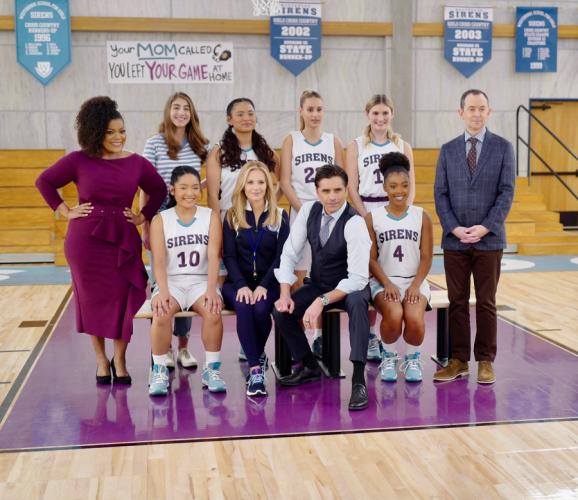 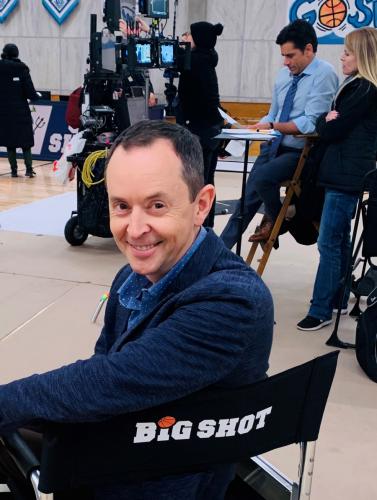 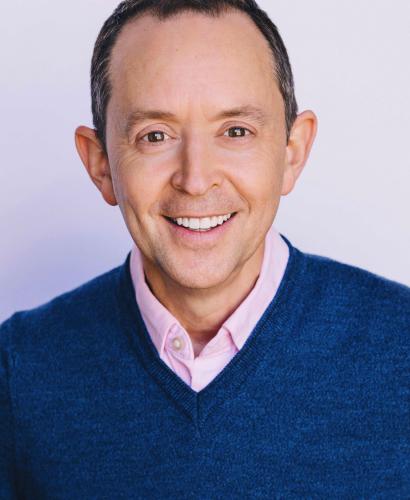 “Big Shot,” which stars John Stamos and Yvette Nicole Brown, is the story of second chances for a hot-headed coach (Stamos) who loses his big time collegiate coaching job in the NCAA and has to start all over by teaching at a girl’s private high school.

“It is also a story of second chances for his relationship with his daughter and for every character in the show who seem to all be trying to start something new,” Robichaux said.

Robichaux, who graduated from SFA in 1996 with a B.F.A. in theatre, has been seen in the films “Boyhood,” which was nominated for six Academy Awards and won the Golden Globe for Best Picture; “The Book of Love,” with Jason Sudeikis and Jessica Biel with all original music by Justin Timberlake; “Bernie,” opposite Shirley MacLaine, Jack Black and Matthew McConaughey; as well as extensive television credits, including “Unbreakable Kimmy Schmidt.” Recent credits include “Ocean’s 8,” the ABC comedy “Speechless,” and “Where’d You Go Bernadette?” with Cate Blanchett, marking Robichaux’s fourth film with award-winning director Richard Linklater.

In “Big Shot,” Robichaux plays George Pappas, a school counselor, which allows him to call on his experience as an educator. In addition to continuing to earn roles on the big and small screens, Robichaux is a member of the M.F.A. acting faculty at the University of California San Diego. Playing Pappas means he “gets to be in the middle of a lot of stuff and meddle,” he said.

“Being an actual educator has been a great asset because so many of the cast are the age of the students I work with,” he said. “It’s been a pleasure to be colleagues with young actors whom I am usually only teaching.”

Robichaux described Stamos and Brown as “everything you would want them to be.”

“Kind, genuine, thoughtful, so funny and supportive of the whole team,” he said, “especially when Covid hit and things were so hard, they were constantly texting the cast to keep up the good work and keep spirits high. They are two of the best actors in television right now, hands down.”

“Richard is one of the most pliable actors I’ve ever worked with, and that is a high compliment,” Stamos said. “On our new Disney+ show, his character George started out one way, then David Kelley decided to take a complete 180 with George. Without missing a beat, Richard created (recreated) a character to rival my Marvyn, resulting in some of my favorite scenes on our show. To act with him is like playing music with a great musician or sports with a great athlete. He listens. I throw him a fastball; he catches it, then lobs something at me that either challenges me or makes me laugh. He’s a consummate pro who I learn something from every time I act with him. He’s a great family man, and I admire that too.”

“He makes every day on set fun,” she said. “And he’s such a great actor that even if I know what his lines are, I never know what bit of silliness or gravitas or magic he’s going to bring to them. The gift of working with him has been a masterclass.”

Robichaux continues to keep up his teaching schedule while working on the new series.

“Since our show is only 10 episodes, and I am usually in just a few scenes per show, it hasn’t been hard on my schedule,” he said. “It shoots in L.A., so that certainly helps. Also, UCSD is one of the best research institutions in the world. I am not only encouraged but expected to do big things in my field of research.”

He said he wants SFA theatre students to know it’s possible for theatre graduates to be successful on many different levels.

“I always want SFA students to know that this is possible,” he said. “I’m the perfect example. I was a first generation college student from a small town in Texas, and now I hold the endowed chair in acting at one of the most respected M.F.A. acting programs in the world, and I will also be on your TV this month. That all started with a degree from SFA.”

Robichaux came to Nacogdoches in the early 1990s from Channelview, an oil refinery suburb of Houston. He earned a Master of Fine Arts from Rutgers University, has worked with many of the top programs in the country and is a nationally recognized leader in actor training. He is an outspoken advocate for theatre education and has delivered keynote addresses at several events, including the Southeastern Theatre Conference, Texas Thespian Festival, Florida Association of Theatre Educators, Heartland Film Festival, Colorado Thespian Festival, and the Educational Theater Association's National Teacher Conference. He is also a judge for the College Television Awards presented by the Emmys. Robichaux was the head of acting at Penn State University prior to his arrival at UCSD where he teaches acting process to M.F.A. actors as well as a course on professional practice and on-camera acting.