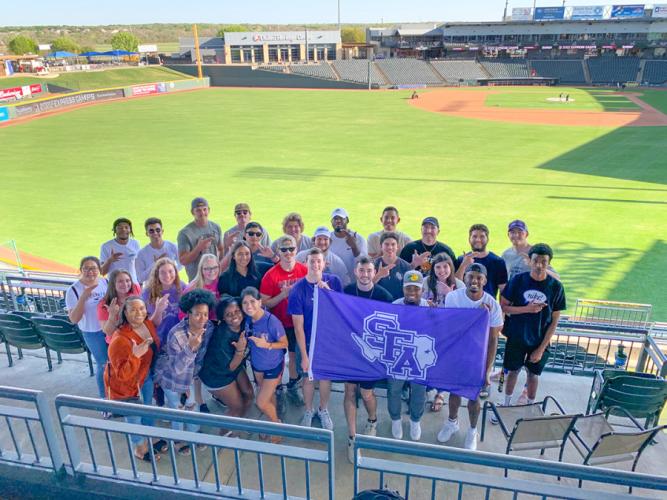 Nearly 30 Stephen F. Austin State University sports business students formed professional connections and gained industry insight during a recent visit to the Dell Diamond, home of the Round Rock Express, the Triple-A minor league affiliate of the Texas Rangers, as part of a career exploration trip to Austin. They also toured the Q2 Stadium, home of the Austin FC soccer club, and the Cedar Park Center, home of the Texas Stars hockey team.


NACOGDOCHES, Texas — The Austin area has made a name for itself as a hub for up-and-coming sports stars. It also offers opportunities for those mastering the business side of sports, as students from Stephen F. Austin State University’s Rusche College of Business learned on a recent trip to the capital of Texas.

“Working in sports is tied very specifically to place and to sites of sports, such as stadiums, arenas and ballparks,” said Dr. Robert McDermand, senior lecturer of sports business and management. “The events themselves form the core of the business, and the activity in the venues forms much of the business side of sports.”

Students must understand the relationships between facilities, sports, fans, marketing, sponsorships, ticket sales and personal engagement to be successful in this type of business, McDermand said.

“Trips like this expose our students to a level of sports that isn’t available locally, but it is likely the level they’ll be working at in their first job,” he said. “Students have the opportunity to engage with sports in a fun but meaningful way and meet professionals who one day might be key members of their professional networks.”

For Colby Jackson, senior from Houston, president of SFA’s Sports Business Society and a huge Texas Rangers fan, the trip marked his first visit to Austin. He said his favorite parts of the experience were touring the Dell Diamond, seeing Rangers’ minor league prospects play in person, and talking shop with Round Rock Express staff members, including Reid Ryan, chief executive officer of Ryan Sanders Sports & Entertainment and son of Hall of Famer Nolan Ryan.

“They talked to us about their careers and what it’s like to work in their field,” Jackson said. “They emphasized that making connections is key to survival in the sports industry. The sports world is small, so it's important to make connections and build positive relationships.”

Kaitlyn Rieke, junior from League City, learned that minor league baseball is a great place to start in the industry; however, as a soccer fan, she was most excited to visit Austin FC. The club began playing in the Western Conference in 2021 in the new Q2 Stadium.

The visit to Q2 Stadium led to a big professional network connection for Rieke.

“I talked to Alison Roscoe, the senior vice president of corporate partnerships for Austin FC, and she emailed human resources my résumé and told them who I was for future jobs,” Rieke said. “So, I now have a connection with someone inside a pro sports organization because of this Austin trip.”

Roman Farias, junior from Humble and president of the Lumberjack Fantasy Football Club, said he’ll be pursuing an operations or marketing coordinator position for a professional sports team when he graduates.

“This trip taught me to be open to innovative ideas and take up new challenges that can help you grow your professional status,” Farias said. “I also learned how crucial sports teams are to a city and how people of all ages and ethnicities can come together and enjoy a sporting event.”