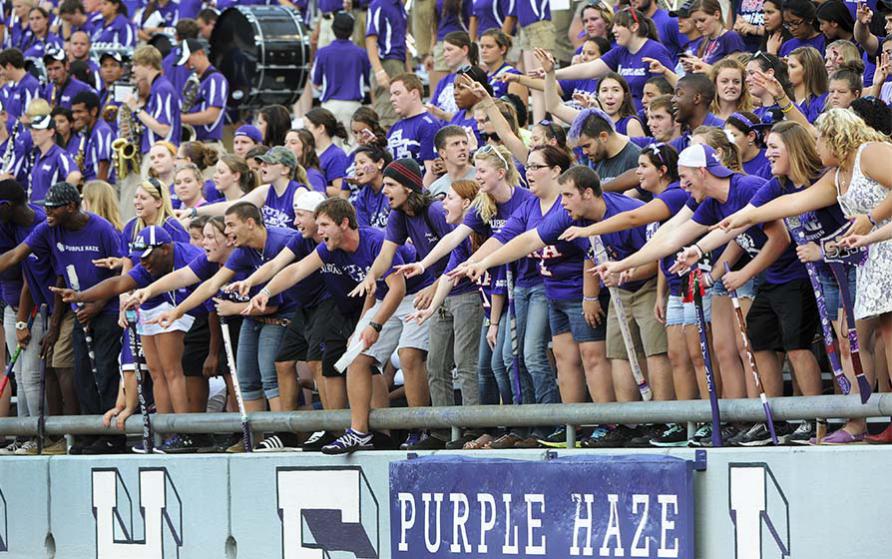 A tradition of team spirit

At SFA, you don’t have to be an athlete to get in on the fun of Lumberjack athletics. Our unique traditions are part of the full SFA experience, and we welcome all Lumberjacks — from first-year freshmen to parents, alumni and faculty — to join us in our fight song as we cheer our teams on to victory.

Grab your axe handle, put on your craziest purple outfit and get ready to cheer on the Lumberjacks!

Whether you love athletics or just love to be around people who are super excited to be Lumberjacks, joining the students in the Purple Haze student section  is the best way to demonstrate your SFA pride!

Purple Haze is the nickname for the student cheering section at all sporting events. Everyone becomes a member of the Purple Haze student section after receiving their Purple Haze T-shirt at Orientation. What are your duties as a member? Unite with your fellow Lumberjacks, and scream for the home team in the Purple Haze section. Don’t forget to wear your purple!

Of course, there’s more to Purple Haze than cheering: Jacks’ Charge is a special tradition for football season, when the Purple Haze section rushes the field before kickoff, waving their axe handles proudly.

During basketball season, members of the Purple Haze student section put on crazy costumes, sit right behind the other team’s hoop and do their best to distract the opposing team.

Battle of the Piney Woods

A major highlight of the football season, the Battle of the Piney Woods is a face-off between SFA (yay!) and our biggest rivals, the Sam Houston State University Bearkats (boo!). It’s a battle so epic that it’s held at NRG Stadium, home of the NFL’s Houston Texans. Students, faculty and alumni from both schools come from all over the state to attend.

Want to attend the Battle of the Piney Woods? You can catch one of the student fan buses on campus and ride to Houston with your fellow Lumberjacks.

You’re not a true Lumberjack until you’ve heard the resounding boom of Ol' Cotton. Members of the SFA ROTC roll Ol' Cotton out for every home football game, and they fire it every time the Lumberjacks score a touchdown. If you’re anywhere on campus — or anywhere in Nacogdoches, for that matter — Ol' Cotton will tell you when the Lumberjacks are scoring.

And we celebrate every Lumberjack victory — from football and basketball to cross country — by lighting purple victory lights on the Steen Towers.

Known as “The Boldest Sound from the Oldest Town,” the Lumberjack Marching Band is the second largest in Texas. Even if you’ve never witnessed an SFA football halftime show in person, you may have seen our renowned band in action.

Our basketball pep band is the highlight of the game and the life behind the student cheering section. These talented musicians are key to promoting school spirit during any Lumberjack basketball game and pep rally.

We fight for our honor and praise our alma mater
Hail dear ol’ S-F-A!

From the oldest town in Texas
Where the purple lights shine bright for vict’ry
We fight for our honor and praise our alma mater
J-A-C-K-S,

Want to Attend a Game?