A key moment during the event was the announcement that the university has already raised $79.59 million, securing almost 80% of its overall $100 million goal.

The campaign is the most ambitious in SFA's almost 100-year history and has steadily gained momentum during its silent phase, which began in September 2015.

"We are incredibly inspired by the growing support from our Lumberjack community members and the way they have risen to every occasion to invest in SFA and help to secure our future," said Dr. Scott Gordon, SFA president. "We are taking the necessary steps to transform our institution into the model of a new American university — one characterized by dedication to the pursuit of excellence, broad access to quality education and the creation of meaningful societal impacts."

More than 14,500 donors have already supported the Elevate SFA campaign, including 8,603 donors who made a first-time gift to the university. Notable gifts during the silent phase of the campaign included 12 gifts of $1 million or more.

Gordon emphasized the campaign's importance in driving SFA's strategic plan, SFA Envisioned. The campaign empowers SFA to pursue its stated vision to engage students in experiences that prepare them for the challenges of living in a global community.

Anchored by four objectives, the campaign priorities are

Ensuring SFA degrees are accessible and affordable ties in with one of the foundational goals of the SFA strategic plan — reducing the average debt of students. It also can play a role in another foundational goal — increasing retention.

Bill Elliott, president of Elliott Electric Supply, honored his late wife, Micky, with a pledge of $8 million to support scholarships for fine arts students, and the college was renamed the Micky Elliott College of Fine Arts in her honor.

"The college not only develops professional performers but also offers East Texas residents an opportunity to enjoy cultural events that rival those in metropolitan areas," Elliott said. "Fine arts students spread the SFA story worldwide, and my family is honored to offer an endowment to assure the perpetual availability of scholarships that will attract the outstanding talent that has made SFA and its students so admired."

A priority of the campaign is building an endowment to ensure SFA is competitive when recruiting qualified and knowledgeable faculty members who are able to drive program enhancements and innovation.

"Donor-endowed funds, especially those that support named faculty positions, are extremely important to universities," said Dr. Lorenzo Smith, provost and executive vice president for academic affairs. "Professorships and designated funds to support research activities play a crucial role in faculty recruiting. They reflect the trust philanthropists have in the mission of an institution and their desire to leave a legacy associated with that mission."

The university offers approximately a dozen professorships that incentivize faculty members, including the T.L.L. Temple Distinguished Professor in the Arthur Temple College of Forestry and Agriculture, the Tom F. and Deborah Nichols Pruitt Patent Education Professorship, and the Montgomery Professorship for Humane Education.

Donations that support faculty members also may be used to establish centers or institutes on campus to advance an area of study and to create interdisciplinary programs that appeal to students' academic interests and the workforce needs of employers.

Another goal of the campaign is assuring students, faculty and staff have access to modern facilities that meet their needs, such as the recent expansion and renovation of the Griffith Fine Arts Building and the addition of the Loddie Naymola Basketball Performance Center at Johnson Coliseum. The center features the Coach Harry and Tillie Miller Fan Observation Area, the Bob Sitton Men's Basketball Coach's Office, the Joe Max and Jane Green Lobby, the Dr. Robert and Ruth Carroll Sports Medicine Offices, the Dr. Bill and Barbara Gandy Men's Basketball Lounge, and the Hank and Suzy Crouse Weight Room.

"I took the competitiveness I learned on the basketball court into my business, which is one of the elements that led to my success," said Naymola '78 of Austin. "For this reason, I choose to give back to the university that gave me this opportunity to learn so much."

In addition to his financial support, Naymola is playing an important role in the fundraising effort by serving as a member of the President's Campaign Cabinet, along with David Chadwick of Center, Kurt and Cindy Kalkomey of Dallas, and Michael Taff of Houston.

This support provides operating funds to strengthen and elevate both academic and athletic programs. Curricular and co-curricular programs should evolve as the needs of students evolve, Smith said.

"Funding for program support will allow us to be innovative in the ways we reach our students and prepare them for lifelong learning and successful careers in the 21st century," Smith explained. "We can help students have more service-learning experiences, and more community engagement and international education opportunities, with the aim of building their leadership skills to the benefit of the communities where they will eventually live and work."

The capital campaign will culminate in conjunction with the university's centennial celebration, which will begin in September 2023.

"Those of us who love SFA, especially those whose lives have been impacted by its people and its programs during the past century, have an opportunity to make certain that the qualities that make this university uniquely transformational will become even stronger and available to new generations of students," Gordon said. 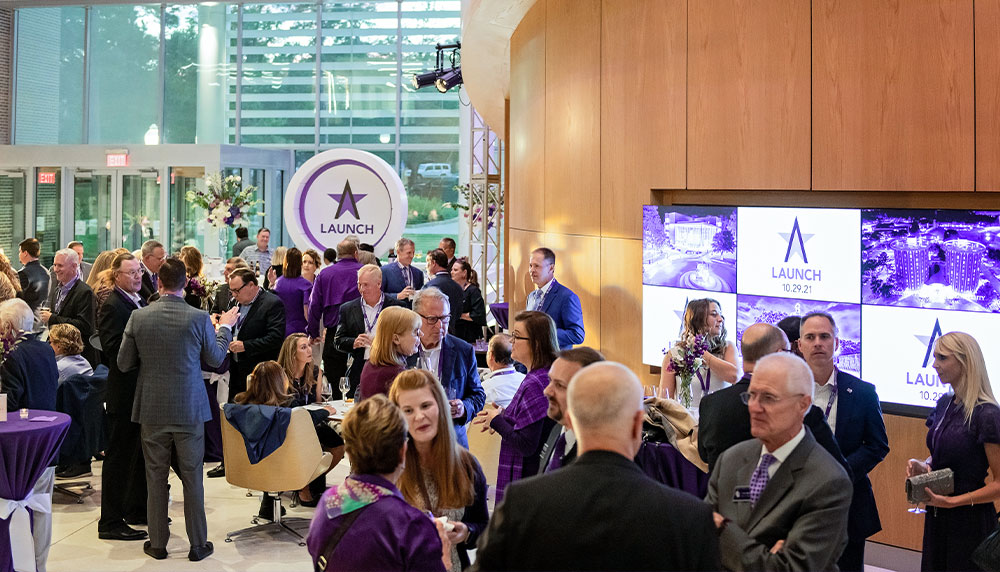