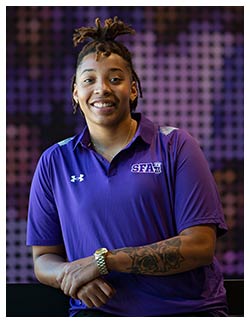 When Avery Brittingham visited the SFA campus as a prospective member of the SFA Ladyjack basketball team, she was struck by how sincere and empathetic the coaching staff seemed. The feeling was so strong that she immediately committed to SFA, foregoing the opportunity to visit other schools that were recruiting her.

This prescience proved to be beneficial when, two days after she arrived on campus for summer workouts, her coaches had to deliver the news to Brittingham that her mother, Angela N. Smith, had passed away.

"That was July 1, 2020," the Fort Worth native said. "They supported me but also gave me the space to process this and to be with my family. Then, they became my family."

While coaches and trainers within the SFA basketball program have helped Brittingham adjust to life as a collegiate student-athlete, her roommate, who is from Germany, widened Brittingham's perspective of the world. Her teammates also have provided valuable learning experiences.

"Being at SFA has helped me see the bigger picture, not just as a person, but as a member of a team," she explained. "It's a different mindset to think of the group, rather than just a single individual. There's no doubt in my mind I chose the right school."

Some videos circulating on social media show the 6-foot forward nailing big tournament shots during the Ladyjacks' undefeated season, including a shot in the final seconds of the NCAA Tournament game against Georgia Tech that could have been a bracket buster. "My Twitter blew up for a few days, but that was about it," she said. "Then it was time to get back to work!"

Brittingham plans to take her passion for athletics and use it to drive her next step — coaching young people in Fort Worth.

"I want to teach them they can have options in this world," Brittingham said. "You have to keep your eyes on the prize, and take little steps to achieve your goals; don't just take one big swing and then give up if it doesn't work out. Never give up. Time keeps on ticking, so you have to manage the time you have here on Earth."