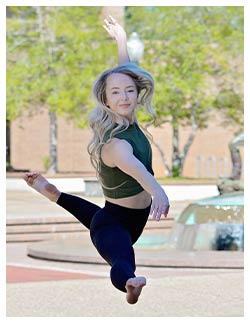 When doctors first told Addison Pope she may not have a career in dance, she was devastated. Then she set out to prove them wrong.

Dancing since age 2, Pope began wearing a back brace when she was diagnosed with scoliosis at age 12.

"It wasn't successful, and my spine had begun to rotate," she said. "When I was 17, I was told I had to have spinal fusion surgery."

Two months after her high school graduation, surgeons placed rods along the entire length of Pope's spine to correct the curvature. The surgery was mostly successful, and staying active was one of the doctor's orders.

"Dancing professionally seemed to be out of the question," Pope said. "In their very nice way, the doctors told me that probably was not going to happen. As long as I could move, I was exceeding their expectations."

With a tough mentality that matches her physical fortitude, the Carthage native enrolled in fall classes at Panola College and was dancing within four months of the surgery (although jumps were forbidden). She choreographed several productions for Panola's theatre department and worked part-time at the dance studio where she'd studied all her life. She even participated in a short scene in the studio's spring recital.

"When I came out, everyone knew what I'd been through and that it was my first time back on stage," she recalled. "Everyone just cheered; it was pretty amazing."

Still determined to earn a degree in dance, Pope was feeling almost back to "normal" by the beginning of her sophomore year, which was spent at a Louisiana university.

"I enjoyed it, but I wanted to be back in Texas, and when I walked into the SFA audition for the Repertory Dance Company, it instantly felt like home," she said.

Now a senior, Pope is pleased when other dancers aren't aware of the trials she has overcome, and she typically likes to keep it that way.

"I want to be judged just as a dancer, not as a dancer who has rods in her back," she said. "SFA has provided that opportunity for me. There are talented dancers here who have a passion that you don't find everywhere. We dig into what dance really is — the artistry behind it. It's about creating a story and, without speaking a word, communicating a point that is meaningful and moving for your audience."

With the new facility being created for the dance program in the Griffith Fine Arts Building, these opportunities will be strengthened and enhanced for Pope and future dancers.

"We work on technique every day — and how to be better dancers physically, but what you are really learning is how to love dance even more."