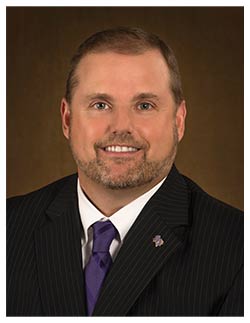 It is time to Elevate SFA.

For nearly 100 years, Stephen F. Austin State University has been an incredible force in East Texas. Like the piney woods surrounding the campus, there was a day when even the idea of an institution like what we have today was just a seed, a hope. In our first century, we have reached incredible heights, always climbing into the bright, expansive Texas sky.

In this spirit, announcing our largest fundraising campaign ever – with a goal of $100 million – gives us all a charge to reach higher and see farther.

We are building our campaign on four pillars – student scholarships, faculty support, program support and facility enhancements. You can read more in the pages of this issue of Sawdust and on our campaign website at sfasu.edu/elevate.

The progress of the campaign is already staggering. While the quiet phase began several years ago, upon the public announcement during this fall's Homecoming weekend, we announced having raised nearly $80 million already. In the Board of Regents meeting that followed a few days later, we officially recognized Bill and the late Micky Elliott for their generosity. The College of Fine Arts will now be known as the Micky Elliott College of Fine Arts in their honor.

We have so many stories to tell about the people of SFA. Our students and alumni are amazing people who are changing the world for better, thanks to the guidance and mentoring of faculty, staff and friends throughout our Lumberjack community. We see more people to serve, more subjects to learn, more knowledge to share and more industry to transform.

We are at new heights, and our forest of influence is expanding. We have benefited from generations before us. We carry on their legacy and see what we can do to keep SFA on a trajectory of healthy growth. We share what has been passed to us and what we have learned for ourselves. Greater discovery is ahead.

Together we cooperate, and together we will elevate this fine institution so that it can be seen as a source of strength and opportunity throughout East Texas and beyond.