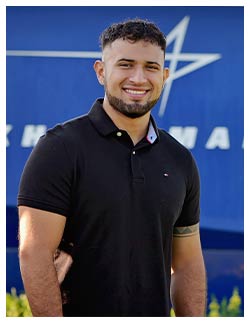 "A common trend in my family is that once you become of age, you drop out and go to work to help with bills," he said. "Especially because of my situation, I was eager to help my mom out."

Campos is the youngest child in a single-parent home, and his mother is disabled.

"I grew up thinking college was impossible, because I knew my family couldn't pay for it," Campos said. "No one in my family had gone to college, so I didn't even want to think about it. A college degree was really a reach for the stars."

Campos began working at age 16 at a local restaurant and was soon promoted to a management position. But his teachers at Lufkin High School, as well as his mom, encouraged him to stay in school. He was named a National Dell Scholar and, as a Smith-Hutson Scholarship recipient, received a full-ride scholarship to SFA in 2017.

"I realized I had an opportunity," he said. "It was up to me to give it everything I had."

The first step in giving education his all was selecting a major.

"I asked someone what the most challenging major is, and they said physics," he explained. "I chose physics because I wanted to prove that anything is possible. I especially want anyone who comes after me, my kids or my grandkids to know they shouldn't be discouraged just because something is difficult."

Campos said the support he received at SFA played an important part in his success in earning an engineering degree. In addition to serving as an Orientation leader for three years, he was an active participant in the Generation Jacks program for first-generation college students.

"I got to meet other students who were in the same boat as me," he recalled. "As I progressed and saw the accomplishments and growth of other Gen Jacks, I realized this was doable. Even if I didn't talk to them every day, I knew they were there for me. They helped me realize I really wasn't such an anomaly."