The Dixie and Paul Kellerhals Scholarship 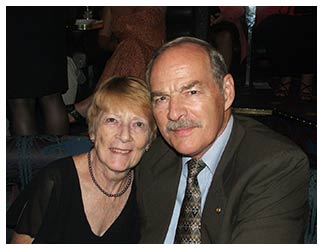 Dixie Kellerhals graduated from SFA with a bachelor's degree in elementary education in 1984 and a master's degree in special education in 1985. Prior to attending SFA, she received a teaching certificate from Iowa State Teachers College in 1957 and taught kindergarten for four years in Iowa Public Schools before becoming a full-time Army wife to Paul in 1964.

When Dixie and Paul's five children were enrolled in school, she began her studies at SFA. After her graduation, she served as an educational diagnostician in the Killeen Independent School District for 11 years before retiring in 2000 to be a full-time grandmother and volunteer with various organizations. Dixie passed away in February 2021.

Paul earned four college degrees: bachelor's and master's degrees from the University of Northern Iowa, a master's degree from the University of Central Texas and a doctoral degree from Auburn University. He served as SFA's professor of military science from 1982 to 1986. He spent his early years in the U.S. Army, which he entered in 1954. He served in the demilitarized zone in South Korea before leaving the service in 1956.

In civilian life, Paul was a high school head football and basketball coach and served as an elementary school principal before returning to active Army service in 1964, completing a tour in Germany, two tours in South Vietnam and three tours in South Korea.

He later served as the director of teacher education at the University of Central Texas and retired as a lead education specialist with ECS Region 12 in 2004.

The Dixie and Paul Kellerhals Scholarship will annually support four students enrolled in the James I. Perkins College of Education. All recipients must have a high school GPA of at least 3.0 and have participated in extracurricular activities and worked or volunteered during high school. Previous recipients may reapply and compete for the scholarship up to four years for undergraduates and two years for graduate students under specified criteria.

Make a gift today and have an immediate impact on SFA students and programs. Your gift helps create educational opportunities for current and future Lumberjacks and can support academic and athletic programs, research initiatives, and scholarships in perpetuity.