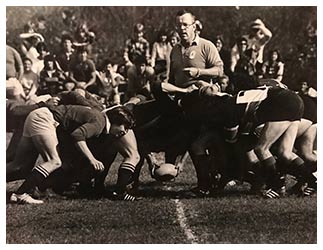 Ask anyone who knew Dr. Robert "Bob" Fleet to describe him, and they're likely to toss out countless descriptors.

To some he was a coach, to others he was a teacher, but to all he was a fierce opponent on the rugby pitch. A research associate and coach of the SFA Rugby Club for more than 40 years, Fleet touched those who knew him in ways that were as distinctive as he was.

"He was my rugby dad," said Dan Persha '79, former SFA rugby player. "I loved him to death. He taught me strong rugby fundamentals, which were critical against larger and faster opponents. There were a few times we hated his training techniques, but that was only momentary. They always made us better rugby players."

Fleet became involved in the sport in the early 1970s while working on his doctoral degree in wildlife and fisheries sciences at Texas A&M University. After graduating, he made his way to SFA, where he was employed in the Arthur Temple College of Forestry and Agriculture and played for the SFA Rugby Club before serving as its coach. During Fleet's tenure as coach, gradually the club improved, and in 1979, it won the Texas collegiate championship tournament.

"Bob taught old school rugby fundamentals as a player and coach," Persha said. "His training sessions were not fun and very physically demanding. However, over time, players could see the positive results on the pitch and quickly embraced the training techniques Bob taught." 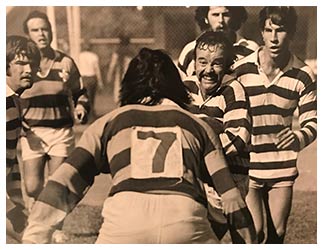 In addition to his work with the SFA club, Fleet helped develop the Eastern Counties Division SFA played within.

"Bob was really instrumental in the formation of early Texas rugby and organizing it as it came together," Persha said.

Known as the "godfather of East Texas rugby," clubs from Shreveport to the Gulf Coast benefited from Fleet's leadership, allowing players to earn All Star honors at the divisional, state and Western USA levels. Fleet also served as coach and head selector of the All Star Team.

Though a man of varied interests, the sport of rugby was his passion, said Diana Montgomery, Fleet's wife of 41 years.

And though it's been almost four years since Fleet died, his former athletes still talk about him with a palpable sense of respect. 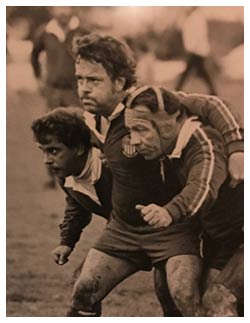 "I know there was no one who had more influence on the early development and survival of collegiate rugby in Texas than Bob, and I believe every Texas collegiate player since owes a debt of gratitude to Bob," Michael Morris '81, former SFA rugby player, wrote in a letter recommending Fleet for induction into the Texas Rugby Union Hall of Fame.

Fleet was enshrined into the Hall of Fame in early November, the first from SFA to claim the honor. A plaque now hangs in the SFA Student Recreation Center to commemorate the contributions he made to the university and the sport.

"The story of Bob Fleet is a guy who just absolutely, unconditionally had a love of the game," Persha said. "People play it because inside it transforms them, and it also forces you to play as a team. That's what Bob was good at, and to do that is a gift and an art in and of itself."