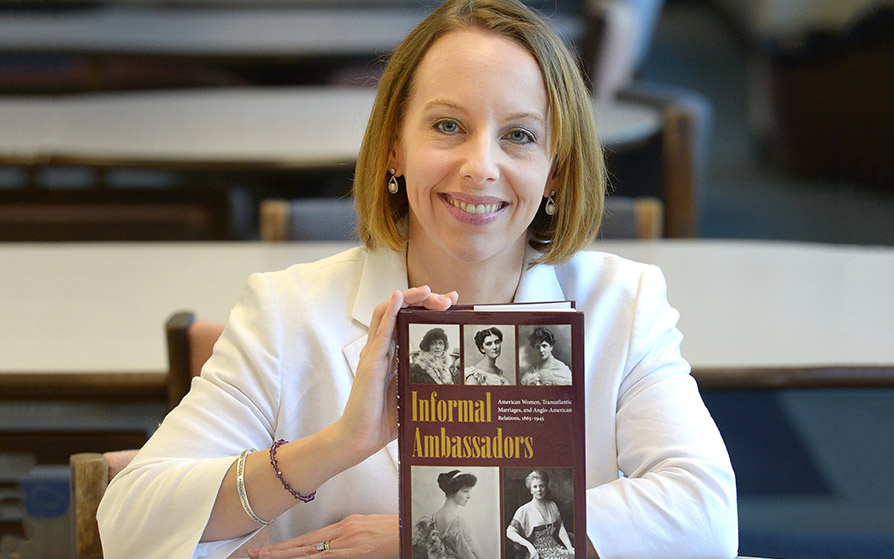 "This cohort of women surprised their families — both British and American — by exhibiting an extraordinary degree of agency in a period that placed women solidly outside the boundaries of politics and diplomacy.”

Dr. Dana Cooper was named one of “40 Under 40: Professors Who Inspire for 2015.” The distinction was awarded by Nerdwallet.com, an organization helping readers access information, insight and consumer-driven advice about decisions including college and career selection.

Professors were chosen based on their passion for the subject matter, “their ability to captivate and engage students in the classroom,” and their campus and community involvement. Cooper said her favorite aspect of teaching is when students “click” with the stories of the past.

The author of "Informal Ambassadors: American Women, Transatlantic Marriages and Anglo-American Relations, 1865-1945," Cooper was interviewed for a three-part Smithsonian Channel documentary by series director Michael Burke in New York that aired in 2015.

The series, "Million Dollar Princesses," explores a period in the late 19th and early 20th centuries when many American heiresses married into the British aristocracy. The documentary was produced by Finestripe Productions based in Glasgow, Scotland, in response to the global sensation "Downton Abbey."

Along with Cooper, contributors to the documentary included a “who's who” of experts on the period and many members of the British aristocracy — notably Jessica Fellowes, author of "The World of Downton Abbey;" Charles Spencer, brother of Diana, Princess of Wales; and the current Viscount Astor.

"This cohort of women surprised their families — both British and American — by exhibiting an extraordinary degree of agency in a period that placed women solidly outside the boundaries of politics and diplomacy," Cooper said. "Without the formal title of diplomat or membership in Parliament, these women nonetheless exerted significant influence in the male-dominated arena of foreign affairs and international politics."

The first in her own family to attend college, Cooper earned her doctorate in women's studies at Texas Christian University. She joined the SFA faculty in 2007 and teaches courses in American history, as well as women's and diplomatic history. She is an SFA Teaching Excellence Award winner, and has served as chair of SFA’s faculty senate and as president of the Texas Council of Faculty Senates.