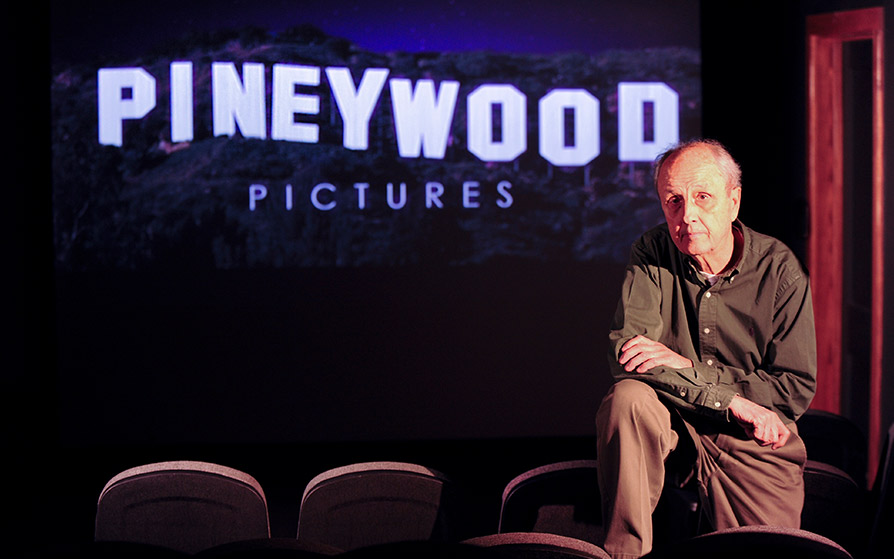 “Movies for me are an art form and not just entertainment. When they are approached with an artistic viewpoint, I believe they are more enjoyable to the audience.”

William Arscott is SFA’s longest-tenured faculty member. Professor Arscott began as an art instructor half a century ago and now teaches filmmaking. He came to SFA in fall 1963 and planned to stay a couple of years. However, those intended two years have now exceeded 52 – and he has no intention of leaving anytime soon.

Arscott, who will be 82 in December 2016, still comes to work each day and looks forward to teaching filmmaking students. When his beloved wife of almost 50 years, JoAnn, passed away in 2008, he said was glad he had not retired. Teaching has kept him busy, and he still enjoys the daily interaction with his colleagues and students.

Trained as a painter and ceramist, Arscott was originally hired as an art instructor at Stephen F. Austin State College at the age of 28. His annual salary of $5,400 supported his wife and five (and later six) children.

The family started its trip to SFA from Michigan by way of Arizona, where they traveled to visit relatives before making the 1,200-mile drive to East Texas in an old Cadillac loaded to the brim with personal possessions.

Arscott recalls visiting a local bank, where he asked for a loan to purchase bunk beds for the children. With no credit history, he was denied. “I’d heard you could purchase items on credit at Johnson Furniture, so I decided to give it a try,” Arscott said. “Mr. Johnson agreed to sell me the beds and let me pay them out. He was the first businessman in Nacogdoches to have faith in me and my staying power.”

When Arscott first arrived at SFA, Dr. Ralph W. Steen was president, and enrollment was 2,054. The campus also housed fewer structures. “There were fields then along East College Street. The lone building located on that end of campus was purchasing,” Arscott said.

He also recalls the dress code being different. He said women could not wear pants, and men wore button-down shirts and slacks.

In the 1970s, Arscott said the College of Fine Arts began to contemplate offering a filmmaking program; in 1976, he was asked to run it.

“I didn’t know a lot about filmmaking,” Arscott said. “To help get me up to speed, I went to California during several summers and took classes from the American Society of Cinematography to learn professional techniques.”

According to Arscott, careers in the film industry are unique. “There’s no on-the-job training in this field,” he said. “In order to break into the industry, you must know the language and have experience. There’s no standing around on set and waiting for someone to teach you what to do.”

And Arscott’s students get plenty of experience. “We’re very hands-on. Our students use cameras and equipment within two weeks of starting the initial course,” he said.

Many of Arscott’s former students remember him for the “legendary” art appreciation classes he taught, starting in the late 1960s and into the 1990s. These classes routinely enrolled more than 500 students a semester and are referred to by many alumni as their favorite SFA course taught by their favorite SFA professor.

Today, Arscott spends most of his time on campus in a former boarding house on East Starr Avenue that has been converted into the home of the School of Art’s filmmaking program. He shares an office with one of his most famous former students, two-time Emmy-Award nominee Brad Maule, who portrayed Dr. Tony Jones on the daytime soap opera General Hospital for 20 years.

“The students are responsible for every detail of the process,” Arscott said. “They secure much of the finances to produce the film, cast the production, film it and handle the post-production.”

A testament to the program’s commitment to graduating “camera-ready” professionals, Arscott said about 90% of the program’s graduates are employed in the industry. “They leave us with the skills they need to excel.”

Arscott said his two favorite Hollywood films are “Fried Green Tomatoes” and “Driving Miss Daisy” because they are movies with a message. “Movies should showcase the preciousness, value and uniqueness of life,” he said. “Movies for me are an art form and not just entertainment. When they are approached with an artistic viewpoint, I believe they are more enjoyable to the audience.”

As for his longevity at teaching, Arscott said one thing he’s always tried to do is adapt to changing technology.

The professor’s teaching abilities are reflected in the awards he’s received at SFA throughout the years, including being named a Regents Professor in 1984 and the SFA Alumni Association’s Distinguished Professor in 1986.

Unbeknownst to Arscott, his children were invited to share this special moment with their dad. “I was overjoyed to see my family in attendance, and the room was filled with my SFA colleagues and friends,” he said. “It was a very emotional moment for me as the crowd gave me a standing ovation.”