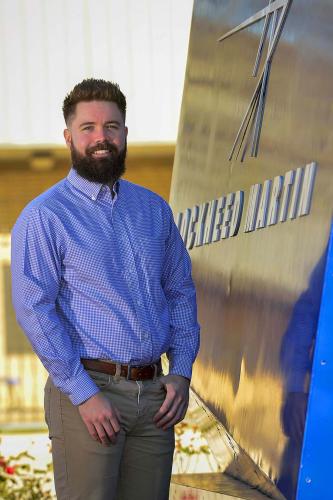 After his plan for a career in nursing fell through, Trevor Crittenden rebounded with a business degree from Stephen F. Austin State University. He went to work at Lockheed Martin two days after he graduated in May 2019. 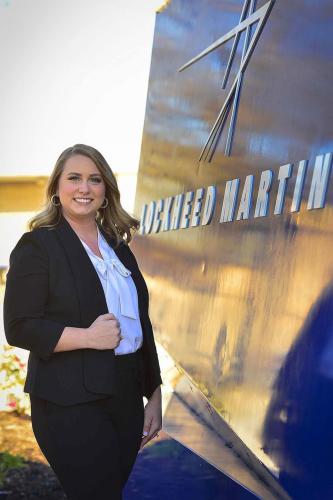 Kelsey Bowers Massey always had her eye on a career in manufacturing. She went to work for Lockheed Martin two days after she graduated from Stephen F. Austin State University in December 2019.


NACOGDOCHES, Texas — For top graduates from the Stephen F. Austin State University Rusche College of Business, the landing spot of Lufkin is increasingly becoming an option. And while the nightlife and the food scene might not compare to what a young professional would find in Houston or Dallas, the opportunity surely does.

Located on Lufkin’s west loop, one of Angelina County’s largest employers, Lockheed Martin, offers great pay, meaningful work, top-tier benefits, and the chance to be part of one of the largest companies in the world. The international aerospace, defense, arms, security, and advanced technologies company employs 110,000 people globally, and had nearly $60 billion in net sales last year.

The Lufkin facility recently expanded with a 30,000-square-foot building and plans to add more than 100 jobs during the next few years. While Lockheed has been a fixture at SFA career fairs since 2017 – it most recently participated in the Fall Career and Internship Expo in October – and while it’s been known as a destination for engineers, a handful of business alums have joined the company since 2018. It’s a new yet positive trend, one that Dr. Pam Rogers, a professor in the department of Management and Marketing, wants to nurture.

The college, Rogers said, can customize a degree plan with courses that dovetail nicely with a career in advanced manufacturing such as: Operations, Purchasing, Analytics, Supply Chain Management, Project Management, and other electives. For those who take that path, or something similar to it, employment at a place like Lockheed could be the reward.

Trevor Crittenden was one such student. He enrolled at SFA when he was 25 years old. He was behind with his degree, his career, and even his life. Or so he thought.

That was in fall 2017, after he’d convinced himself to break out of a dead-end job in Longview and reclaim his ambition with an all-in move to Nacogdoches. The goal was simple – take a lot of courses in a short amount of time and get himself back in the game.

He did just that. In two years – with the help of completed prerequisites and a 15-hour summer semester – Crittenden earned his degree in general business and landed a job as a manufacturing planner with Lockheed. In the parlance of operations management, his journey could be described as inputs, transformation, and outputs.

Nowadays, Crittenden, 28, doesn’t think of himself as being behind. And having met his fiancé, Brooke, at the Lufkin location, he considers himself right on time, or even a bit ahead of the pack.

“I needed to dedicate two years of my life for the rest of my life,” he said. “I looked at all the things I could possibly do, and in business there are no limits. The more I put in, the more I’ll get out.”

While Crittenden was in high school, he was in a serious motorcycle accident that left him with major back problems that ultimately derailed his first attempt at a degree in nursing. A series of surgeries, the last of which was successful, left him unable to finish the program, hence the associate degree and a job as a cardiac stress technician in Longview. But even if he had found his health, Crittenden knew there was something bigger out there.

“There wasn’t any growth,” Crittenden said. “I couldn’t move up because I didn’t have a bachelor’s degree.”

And then came SFA and Rusche’s faculty and staff.

“I found my home,” he said. “They would do whatever was in their power to help me succeed.”

Crittenden wrapped up his two-year push through business school with a 3.9 GPA and went to work two days after he graduated in May 2019. For now, Lufkin is a good spot. But Lockheed has a headquarters in Grand Prairie for missiles and fire control, the division in which he currently works. Lockheed also has a facility in Fort Worth.

“I think that’s my end goal,” Crittenden said, referencing a future move to the DFW metroplex.

Dr. Tim Bisping, dean of the business college, sees a long-term, fruitful connection developing between business majors and the blue-chip company that’s employing them: Alums have a quality place to begin their careers while Lockheed can rely on them to do the job they’re hired to do.

“Graduates of the Rusche College of Business are prepared to have an immediate impact on business operations,” Bisping said. “This continuing relationship with Lockheed Martin serves as validation of this, and it represents an outstanding opportunity for both our graduates and the company.”

As Crittenden raced to make up for lost time, a younger classmate of his was busy executing the perfect plan.

Kelsey Bowers Massey knew going into college that she wanted a career in manufacturing, so a degree in business management was the only thing on her academic radar. As a Lufkin native, she was also aware of Lockheed and the opportunities it offered. Between existing Lufkin connections and those she knew she could make at the business college, a place like Lockheed looked like it was well within reach.

“I was one of those students who was anxious to get done and jump into the business world,” Massey said.

If that was her goal, she accomplished it. She was hired as a manufacturing planner four months prior to graduation, starting two days after college was over in December 2019.

But just because she was career-oriented from the beginning didn’t mean she blazed through college without enjoying the experience. She cherishes the hands-on, face-to-face time she had with professors, particularly Rogers and Dr. Matt Lindsey, her advisor.

During her senior year, Massey was also president of the SFA chapter of Delta Delta Delta, one of the largest and oldest sororities in the United States. With about 130 members at SFA, and not to mention the chapter’s finances and its 30-plus officers, Massey had her hands full.

“I learned how a business works,” she said. “It prepared me for a real job. You see everything.”

As a 23-year-old woman looking to make her way in the business world, Massey has a great role model right there at Lockheed. Marillyn A. Hewson, now the executive chairman of the company, was the chairman, president and CEO from January 2014 to June 2020. In 2018, Hewson, who has a bachelor’s in business administration and a master’s in economics, was considered by Forbes to be one of the most powerful women in the world.

“I was pleasantly surprised at how many women work at the Lufkin location,” Massey said. “Having a female CEO has changed the culture at Lockheed Martin.”

Massey is certainly ambitious. In the near future, she plans on returning to school for an MBA, which puts her on the long track for upper management. And since Lockheed has locations in every state and in countries across the world, Lufkin might not be her ultimate destination.

“I’ll never turn down an opportunity,” she said.

Even if she winds up in a major metro with a plumb position and a salary to match, the alma mater will never be far from her thoughts.

“I want to be part of the SFA community,” Massey said.