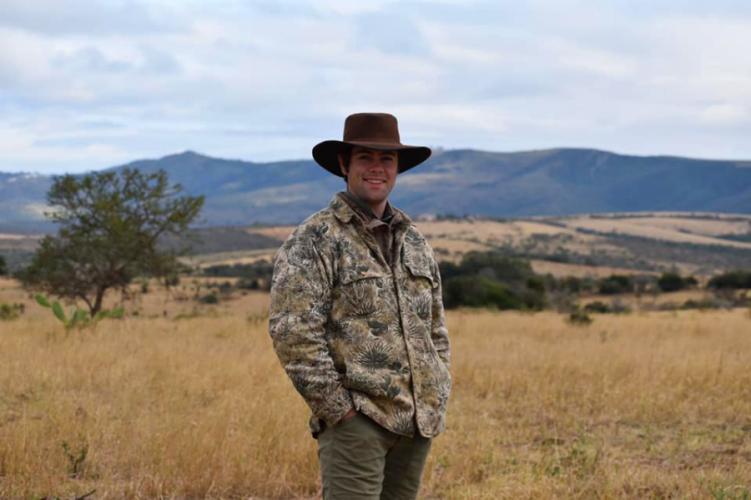 
NACOGDOCHES, Texas — From the moment Jake Hill’s flight landed in the Eastern Cape province of South Africa, he knew the next three months of his life would be unlike any other he had experienced.

“I got off the plane at noon on a Friday, and the reserve manager picked me up and said, ‘I know you’re a bit tired, but we’ve got to go dart some cape buffalo,’” said Hill, a senior studying forest wildlife management at Stephen F. Austin State University. “I hadn’t even unpacked, and I was out darting buffalo in need of medical attention.”

As an intern for the 50,000-acre Buffalo Kloof Private Game Reserve, Hill filled the role of assistant to the reserve manager, completing an extensive range of projects supporting habitat conservation, ecosystem restoration and endangered species recovery.

The reserve works closely with the World Wildlife Fund, Ashia Cheetah Conservation, Veterans Against the Poaching of African Wildlife, as well as other entities and programs throughout Africa to facilitate species reintroduction, relocation and anti-poaching initiatives.

The reserve is home to a number of species included on the International Union for Conservation of Nature Red List. Established in 1964, the Red List of Threatened Species serves as the world’s most comprehensive record of information on the extinction risk status of global flora, fauna and fungi. The black and white rhinoceros, African elephant, leopard, cheetah and the blue crane — the national bird of South Africa — are among the Buffalo Kloof residents found on this list.

“The biggest project they are putting the most energy into right now is their rhino program,” Hill said.

According to the International Rhino Foundation, black rhinoceros experienced a population decline of 96% between 1970 and 1993. During the past two decades, persistent anti-poaching initiatives and deliberate translocations to safer habitat have resulted in some respite to population loss.

“Buffalo Kloof has an anti-poaching team with the sole duty of monitoring the rhinos through game camera traps,” Hill said. “This is one of the many projects I assisted with.”

In addition to the reserve’s anti-poaching team, it also is actively engaged in cutting-edge research to aide authorities in detecting illegally poached rhinoceros horns being smuggled outside the country.

While internships are designed to place students in real-world situations related to their field of study, Hill’s environment delivered exceptionally unique challenges. For example, how does a team sedate and relocate a 7.5-ton male elephant that ventured outside of the reserve’s boundaries and into local communities?

“The reserve has a specialized truck with a crane on it for game capture, and we had two helicopters in the air,” Hill said. “It was chaos because the adult male traveled roughly 8 miles outside of the reserve, so we had to travel on public highways. We had this giant elephant sedated and secured to the back of a truck — it was crazy.”

Ultimately, after hours of tracking, strategizing and precise maneuvering along the highway, the elephant was returned to the safety of the reserve and fitted with a GPS neck collar to track its movements.

Wild game harvested during these guided hunts is donated to the local Yondella community where the reserve is engaged in multiple community development initiatives, including conservation education, infrastructure improvement and job training.

In addition to his daily tasks, Hill collaborated with the reserve manager to organize the first Buffalo Kloof Student Conservation Experience.

“We accepted eight wildlife students from the U.S. and brought them over for a three-week crash course in the conservation and management of South African wildlife,” Hill said.

Cassandra Kapp, SFA forest wildlife management student, was among those selected from universities across Texas.

“Having this experience of working with a group of brilliant, like-minded individuals, I know that as long as I continue to work hard and engage in once-in-a-lifetime opportunities, I can find myself working with a diversity of species in an incredibly exciting career,” Kapp said.

Hill said the three months spent working with large herbivores in Africa fulfills a decades-long dream. And between his time spent reflecting on wildlife conservation models and monitoring endangered species, he ultimately found himself thinking about something other than wildlife.

“At first, I was just focused on the internship, but then I realized I lived in an entirely different culture for three months,” Hill said. “I got to experience so much from the culture and the people there — it was so much more than an internship.”